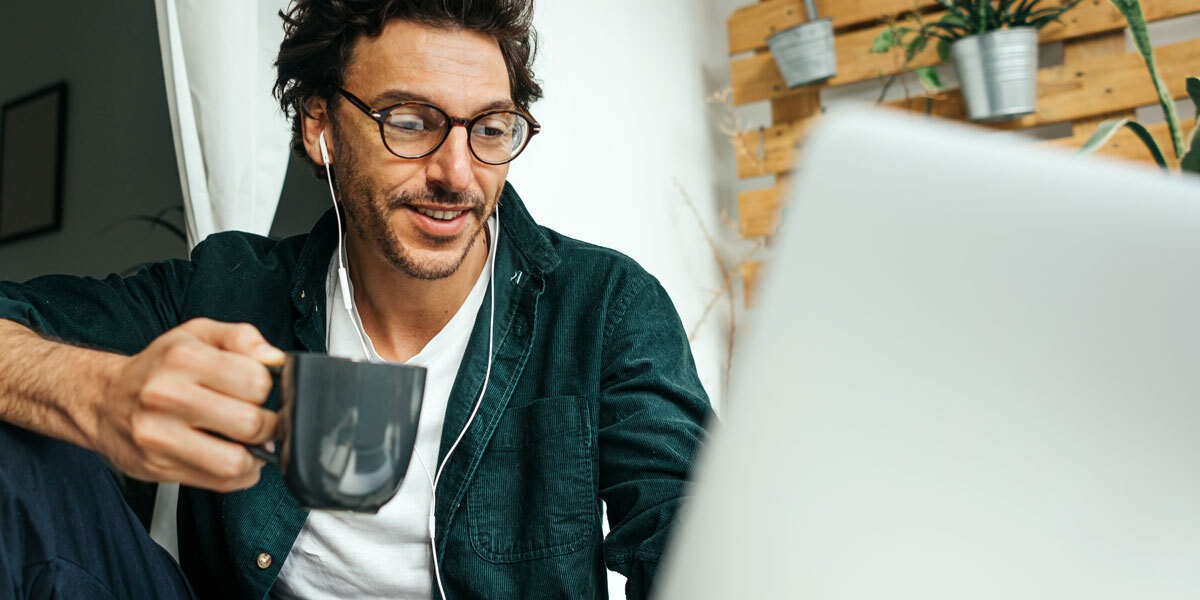 What is the average Python developer salary, and how does it vary around the world and across different industries? Keep reading to find out.

Just certified as a Python developer and looking for your first role? Or thinking about a career in data science and wondering what your earning potential might be further down the line? Then this one’s for you. Python is a diverse, multi-purpose programming language, offering tonnes of opportunities across the tech industry. Whether you’re looking to work in data analytics, back-end development, or some other form of software engineering, the roles are ripe for the picking.

According to the 2021 Stack Overflow Developer Survey, Python is the top programming language that developers want to learn. And for those who already use it, 66.7% want to keep it as their primary language. So if you’re a qualified Python developer, you’re one step ahead of the competition. The big question is: how does this impact what you can earn?

In this post, we dive into the Python developer job market, exploring how much you can earn based on experience and location. We’ll also compare industry salaries and, for good measure, how the average Python developer salary compares to other popular programming languages.

Since about 2018, the popularity of Python has boomed. This likely came about due to a growing need in the tech industry for a multi-purpose programming language that was fast to learn, easy to use, and had a wide range of applications. Python ticks all the boxes.

Python has found a popular following among data scientists, data analysts, and machine learning engineers. That’s because its ease of use makes it perfect for quick prototyping. Python isn’t perfect, of course. As an interpreted programming language, it is slower and less scalable than some other languages out there. That’s why it’s mostly used for back-end development and isn’t the best option for things like games or app development.

Nevertheless, according to over 100,000 listings on the job site Glassdoor, the average Python developer in the US earns $76,526 a year. The exact figure ranges from a low of about $58K to a high of roughly $107K, depending on experience. This highlights that even an entry-level Python developer can earn more than the mean US salary (about $36K).

Note: To keep things consistent, this post uses only US dollars. If you’re not based in the US, this simple currency converter might come in handy!

2. Python developer salaries based on experience

You shouldn’t be too surprised to learn that your experience level has a big impact on how much you can earn as a Python developer. If you’ve already established yourself in a field like data science or data analytics, you’ll earn more than if you’re just starting with some basic back-end work. To increase your salary, you should aim to build your skills over time.

Next, let’s look at some estimates for how much you can hope to earn at different stages of your career.

In general, entry-level roles pay less, that much is clear. Nevertheless, according to Glassdoor, even an entry-level Python developer in the US can expect to start on about $44K. As your experience grows (up to about three years) this can rise to an average of $66K. As you complete a growing number of successful projects, your salary will rise.

Of course, Python skills aren’t the only thing your job will require. As you become comfortable in the role, you should aim to develop additional skills like problem-solving, communication, and how to integrate Python applications with various different software architectures.

According to Glassdoor, a Python developer in the US with 4-6 years of experience can earn an average of $78K. To maximize your earnings likely means specializing in an area where Python is commonly used. This might be something like data analytics, data engineering, or machine learning (or a combination of these).

Presuming you’re going down the data route, tools and systems you might want to familiarize yourself with include things like Amazon EC2 and Amazon Web Services (AWS). Also consider getting to grips with Apple OS X, as well as big data analytics tools and other server-side languages, like HTML and CSS.

Finally, according to the same salary data from Glassdoor, a highly experienced Python developer in the US (with 7+ years under their belt) can earn an average of $86K, up to about $117K. By this point in your career, you’ll likely have branched out beyond simply developing algorithms or architectures using Python. You’ll probably have domain expertise and may have even earned a degree or another qualification. By bringing all these additional skills to the table, you’re highly likely to earn even more. Nice to know what you’re aiming for!

3. Python developer salaries around the world 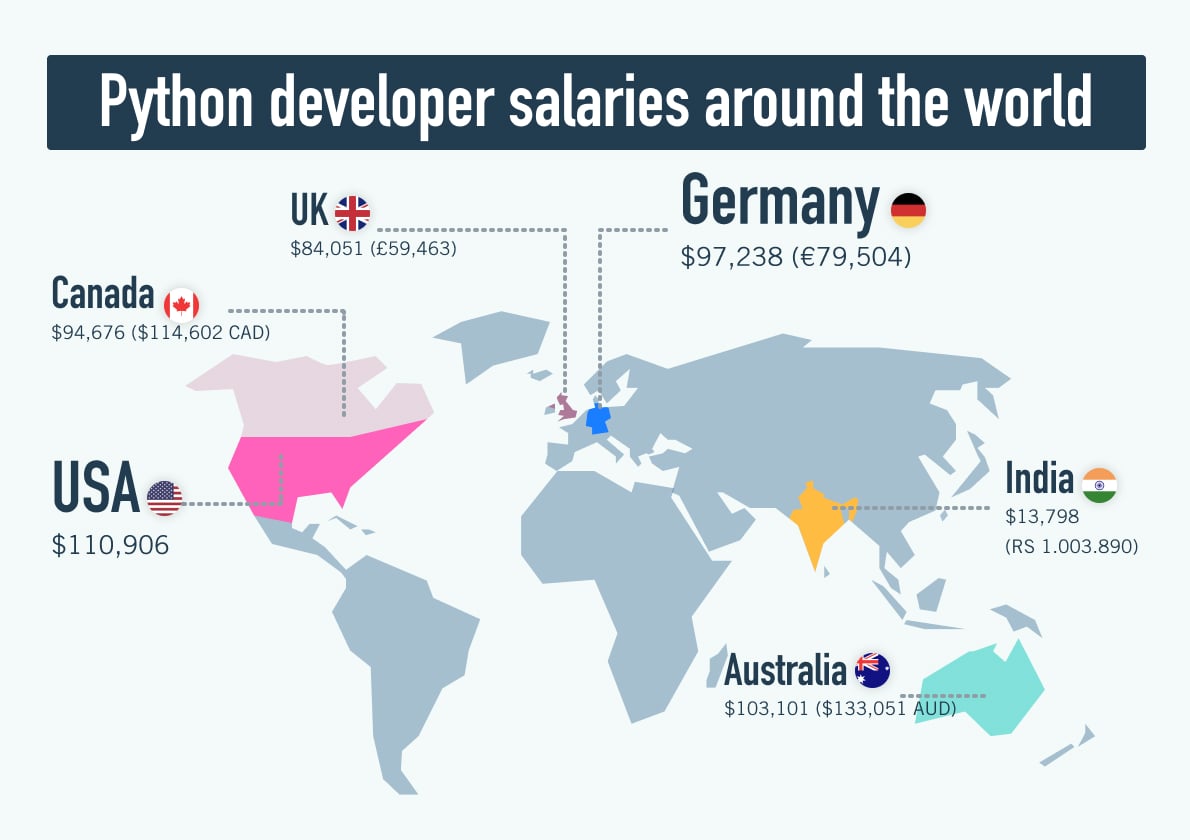 While remote working is now the norm, the location of your employer remains one of the biggest factors affecting how much you earn.

Here, we provide global salary data from Salary Expert. Because they offer higher salary estimates than Glassdoor, we’ve reincluded the average US salary to make the comparison easier. We’ve also converted all data into US dollars.

It’s interesting to note that, in Germany, data science salaries and data engineering salaries are higher than those in Australia and the United States. But this isn’t the case for Python developer roles. This hints once again at Python’s versatile nature. It suggests there are popular use-cases for Python beyond data analytics and machine learning. That’s good news!

Another important factor impacting how much you can earn is the industry you’ll work in. Let’s explore that next.

4. Python developer salary based on industry 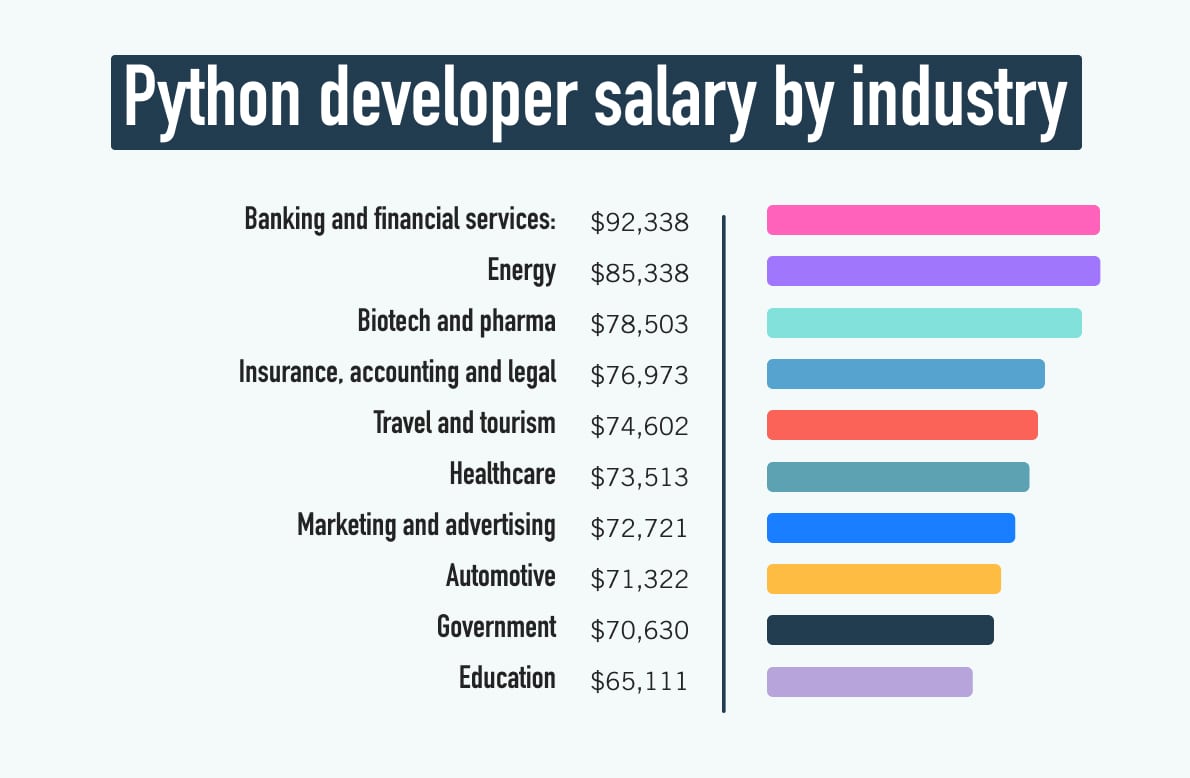 How does the industry you’re working in impact Python developer salaries? It makes a bigger difference than you might expect. The following data from Glassdoor provides a helpful sliding scale of average salaries for ten of the top sectors in the US.

Unsurprisingly, industries with good cash flows—those like finance, pharmaceuticals, and insurance—remunerate their workers the best. Meanwhile, public sector workers, including those in government and education, tend to earn less. Nevertheless, even those on the lower end of this scale earn a pretty decent amount. Whatever your industry passion, then, you’ll not go home wanting. 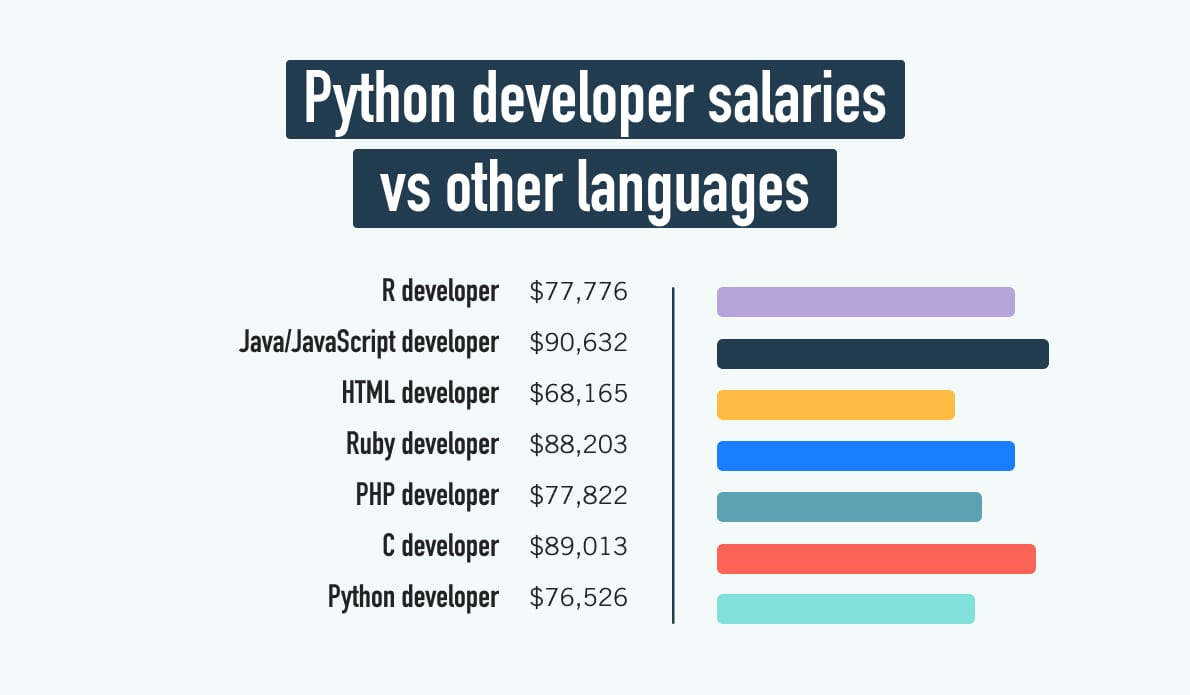 Of course, not all developers code using Python. So how much could you earn if you specialize in another language?

While the usual variations apply (geography, experience, etc.) the amount is often shaped by the speed-to-competence of each language, as well as how it’s commonly used. For instance, more complex languages, like R, have more nuanced applications and require a higher level of expertise. These skills, therefore, often tend to pay more.

Here are some estimates from Glassdoor. Since these are regularly updated based on real job ads, you can click through on each for a more current figure:

Want to increase how much you can earn? Then consider adding another language to your coding arsenal. While this might seem like a challenge, you’ll be surprised how much easier it is to pick a new one up once you’ve already got Python under your belt.

In this post, we’ve taken a broad look at the Python developer job market, comparing average salaries in the US based on industry and experience level. We’ve also looked at salaries around the world and compared how much you can earn using Python versus other programming languages.

If you’ve landed yourself a job interview, be sure to check out what you can expect to earn in your chosen industry at your experience level and in your location. As well as Glassdoor, we recommend using comparison websites like Payscale andSalary Expert to get a broad selection. It could also help to speak with any Python developers you might know (friends or mentors) to see if they can offer any tips for negotiating the pay that you deserve.