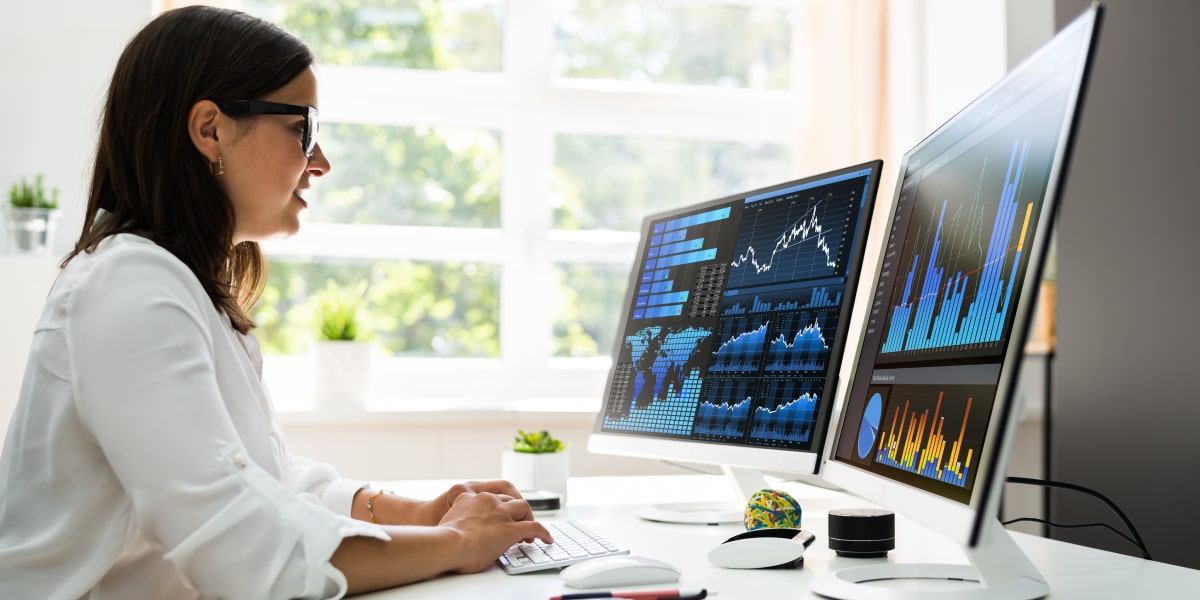 The XLOOKUP function in Microsoft Excel is a powerful search tool, allowing you to find particular values from a range of cells. It acts as the replacement for earlier lookup functions, such as VLOOKUP, eliminating many of the limitations. We’ll explain how to use XLOOKUP, step-by-step, in this tutorial.

As the name suggests, lookup functions like XLOOKUP pull matching data (exact matches, or the closest available match) from a data set in Excel. If there’s more than one matching result, the first or last result in the set is returned, depending on the arguments used.

XLOOKUP acts as a custom search tool, flexible to the demands of different types of data in custom-built Excel spreadsheets. XLOOKUP is a relatively new function, only becoming available for Microsoft 365 users in 2020. While XLOOKUP has similarities to other lookup functions, there are important differences to consider.

In this article, we’ll explain:

Are you struggling to figure out the XLOOKUP function? Then keep reading. You’ll find everything you need to know in this post.

1. What is the XLOOKUP function and how does it work?

Excel already has a number of tools for searching through data, from conditional formatting rules to the built-in find and select tool. These features, however, don’t really change your spreadsheet in a meaningful way. You couldn’t easily reference a formatted cell by color in another formula automatically, for instance.

What if you had data that you need to quickly search through, with custom search criteria that you need to change regularly? This isn’t an uncommon scenario for data analysts, who might want to search and return individual results from a data set with queries that can be quickly customized.

Postal addresses, classroom exam results, profit margins—if you want individual results from data sets like these, the best tool to use is a lookup function. Lookup functions are a staple of complex Excel spreadsheets, with VLOOKUP and HLOOKUP among the most common.

The problem with VLOOKUP (or vertical lookup) and HLOOKUP (horizontal lookup) formulas is that, as the elongated names suggest, they’re pretty limited in scope, forcing you to use workarounds to work with data to the left or right of values (among others).

You can bypass some of these limitations with other functions (like INDEX and MATCH), but the process isn’t efficient. XLOOKUP is the resolution to this problem, allowing you to look up data in columns and rows, both to the left or right of your search value.

It can handle approximate matches, multiple search values, nested queries (using multiple XLOOKUP functions in a single formula), custom error messages, and more. XLOOKUP is (at present) only available for Microsoft 365 subscribers, but for both basic and complex data searches, it’s an absolute game changer.

2. How does the XLOOKUP function work in Microsoft Excel?

To explain the XLOOKUP function properly, we’ll use an example scenario. An example Excel spreadsheet contains the staff list of a small company, containing IDs, names, email addresses, and responsibilities. 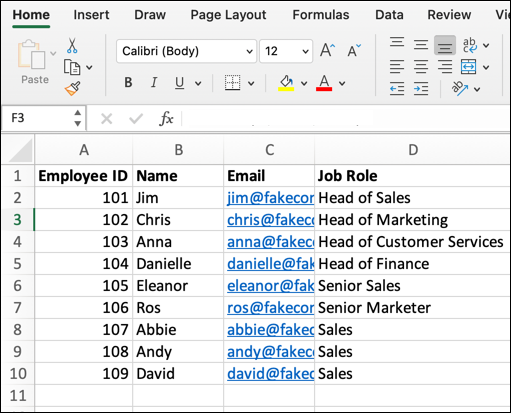 A data set, such as this one, can be used as a searchable directory in Excel using an XLOOKUP formula. A search value for this formula could contain any of the values above, from an ID number to an email address.

XLOOKUP can find a value (matching in full or the closest approximation) from a range of cells (or search array) and return it. To do this, a formula using XLOOKUP has a number of arguments that need to be used to create the query. 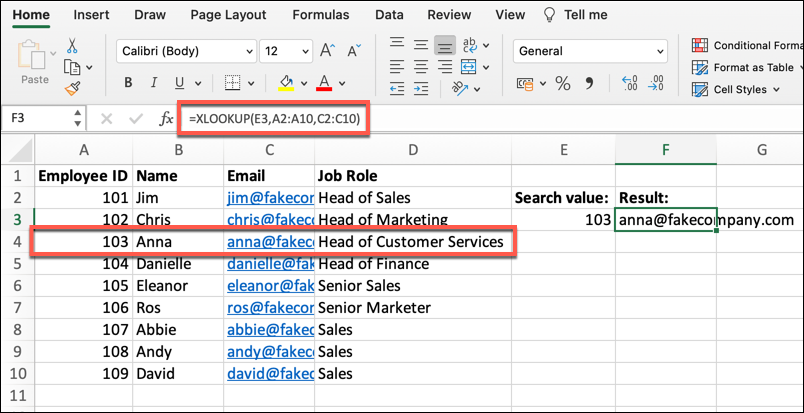 In this example, lookup refers to the search value we’re looking for. For instance, if we’re looking for an ID number, we’d use the value itself (eg. 101) or a cell reference containing that value (eg. E3).

To find those values, we need to identify the cell ranges for the lookup_array and return_array. In this instance, the lookup_array is the column or row that contains the lookup value (eg. A2:A10 for ID numbers in column A).

The return_array is the individual column or row that contains the data that you want to return. For instance, if we’re searching for ID numbers, but want to return the employee name instead, we’d require the correct cell range containing those names (eg. B2:B10 for employee names in column B).

If you’d like to return a custom value when no results are matching, you’ll need to add a not_found argument. This could be a number, text string (in quotation marks), boolean value (TRUE or FALSE) or a cell reference (eg. 1, “not found”, or G1). If you don’t supply this, Excel will return an #N/A error for non-matching values.

If you choose to use 2 for match_mode, you can use wildcard operators such as an asterisk (*), question mark (?) or tilde (~) with lookup values. Excel will return the first available match to the lookup value as a result.

Finally, you can determine the search order for values returned using the search_mode argument. XLOOKUP will immediately match the first value by default (the 1 value for search_mode, if you want or need to specify it), or you can reverse this to use the last matching value with -1.

3. Things to consider before using the XLOOKUP function in Excel

The XLOOKUP function has significant improvements over earlier lookup functions, but there are a few things you’ll need to consider before you use it. These include:

4. How to use XLOOKUP in an Excel formula: A step-by-step guide

If you want to create a formula using the XLOOKUP function in Excel, you’ll need to follow these steps.

Once the cell is selected, press the formula bar on the ribbon bar to begin to edit it.

The cell is active and ready for editing when the blinking cursor is visible on the ribbon bar. If this is the case, you’re ready to begin inserting a new XLOOKUP formula.

As we explained above, a new formula using the XLOOKUP function has specific syntax and structure that needs to be followed. The first step is to begin to type the formula. To do this, type =XLOOKUP( in the ribbon bar.

The next step is to insert your lookup criteria. This is the data you’re looking to search for. While XLOOKUP supports numbers and text strings, most users will want to specify a cell reference (such as A2). This will allow you to change the search criteria (and thus the results) at will without changing the XLOOKUP formula directly.

For instance, using our employee list example, =XLOOKUP(E3 would use the value in cell E3 as the lookup value. In this instance, cell E3 contains the value 103, matching an ID number for an employee.

XLOOKUP will attempt to find the exact match by default. To change this, be sure to add an optional match_mode argument later (see step 5 below).

Once you’ve inserted the lookup value (your search value, or a cell reference containing it), you’ll need to identify your lookup_array and return_array cell ranges.

This could be a cell in another column on the same line (matching ID numbers to job roles in our example employee spreadsheet, for instance).

At this point, if you’re not interested in adding a custom error message, using a different search type (eg. approximate or wildcard matches), or changing the search value order, you can close your formula with a closing parenthesis. Otherwise, continue to add to your formula with optional arguments by following the steps below.

If you’re trying to find an exact match for your lookup value, but it can’t be found in your lookup_array range, Excel returns an #N/A error response. To overcome this, you’ll need to add an optional not_found argument to your XLOOKUP formula.

A not_found argument can be a numerical value (such as 1), a text string in quotation marks (such as “not found”), a boolean value (TRUE or FALSE), or a cell reference (such as A2).

Because each argument is considered sequentially, you’ll need to add a custom not_found argument if you plan on adding further match_mode and search_mode arguments below to your formula.

While XLOOKUP is designed to search for exact matches by default, this can be changed by adding an optional match_mode argument value to your formula.

Using our example spreadsheet, the partial formula =XLOOKUP(E3,B2:B10,C2:C10,”not found”,2 would ensure that XLOOKUP supported a wildcard query. In this instance, XLOOKUP finds the nearest matching value to the wildcard query (ji*) in the lookup_array range B2:B10, then returns the matching value on the same row from the return_array range C2:C10 (an email address).

As a wildcard match, this would be the first, closest approximation. If you want to change the search order (for instance, using the last possible value, rather than the first), you’ll need to add a search_mode argument next.

An optional search_mode argument is the final supported argument in an XLOOKUP formula. This changes the order in which XLOOKUP grabs a matching result. By default, Excel will try to match the first possible value. 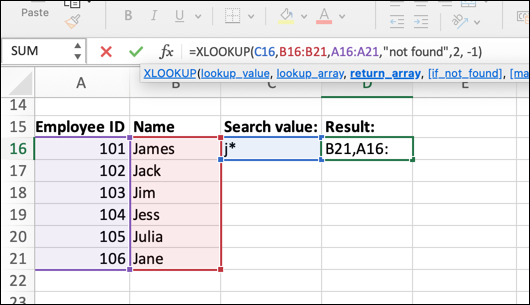 For instance, in a simple wildcard query where J* is the lookup value, an array containing the names James, Jack, Jim, Jess, Julia, and Jane would mean that 101 is the value typically returned, as James is the first value in a query where all values potentially match.

Binary searches can be quicker, reducing the number of searches through a data array to find the correct value (and thus reducing the overall memory impact of the query, especially with larger data sets), but you’ll need to sort your data first before you use it.

Most users will probably want to stick with 1 or -1 for search_mode, but if you’re working with a large amount of data, 2 or -2 will reduce the impact.

For instance, in the formula =XLOOKUP(E3,A2:A10,D2:D10,”not found”,-1,1), Excel finds the exact match or next and smallest value matching the lookup value in cell E2 and returns it. With search_mode set as 1, Excel will search in ascending order, returning the first matching value in the range.

In this instance, with the value in E2 set as 110, and with no values offering an exact match, the next and smallest result is ID number 109.

If you’ve used all optional arguments in your XLOOKUP criteria, make sure to close your formula with a closing parenthesis and press enter (or click on another empty cell) to see the result of your XLOOKUP query.

If you’re looking to search through complex Excel spreadsheets, lookup functions like XLOOKUP offer the best way to do it. Data analysis is all about manipulating data to find the answers you’re looking for—XLOOKUP is one of many essential Excel formulas that data analysts need to have in their repertoire to do just that.

If you’re new to data analysis and you’re trying to build your skillset a little further, you can try out a free data analytics short course, with five daily lessons to help you see whether it’s the right career track for you. For those curious to learn more, we’ve got a number of useful articles you can take a look at next, including: