Whether it’s on our phones, in books or on websites, we’re constantly digesting written words. From instruction booklets to shop fronts, type is all around us. We often reflect on the power of the written word, but rarely do we consider the designer’s role in emulating the tone of the word or sentence.

Behind the scenes, a designer has taken the time to consider the relationship between the look of the text and what the text says. In reality, different moods, atmospheres and emotions can be expressed simply through the type choice. But what actually is typography—and why is it so vital?

In this article, we’ll lift the lid on everything you need to know about typography. We’ll start with the definition of typography, including a brief history of its origins. We’ll then address the benefits of good typography and the impact it can have on your users. Finally, we’ll look into the different elements that comprise typography, and what they all mean.

Let’s kick off with the basics: what actually is typography? In essence, typography is the art of arranging letters and text in a way that makes the copy legible, clear, and visually appealing to the reader. Typography involves font style, appearance, and structure, which aims to elicit certain emotions and convey specific messages. In short, typography is what brings the text to life.

In the video below, CareerFoundry UI design mentor Olga lifts the lid on why typography matters—and what difference it makes for your users.

Typography can be dated back to the 11th century, during the innovation of movable type. Before the digital age, typography was a specialized craft associated with books and magazines, and eventually public works. The first example of typography can be seen in the Gutenberg Bible, which kick-started a typography revolution in the west. Fun fact: the style of type used in the Gutenberg Bible is now known as Textura, and you’ll find it in the font drop down menu on major desktop applications today!

Fast forward to modern day, where typography is mostly associated with both the digital world and print. With the birth of the internet came a creative explosion of the art of typography. Suddenly, web designers had an abundance of fonts and type options at their disposal, making typography more visually diverse than ever before.

2. Why is typography important?

Typography is so much more than just choosing beautiful fonts: it’s a vital component of user interface design. Good typography will establish a strong visual hierarchy, provide a graphic balance to the website, and set the product’s overall tone. Typography should guide and inform your users, optimize readability and accessibility, and ensure an excellent user experience.

Let’s delve a little deeper into why typography is so important.

Not only will good typography enhance the website’s personality, but your users will subliminally begin to associate the typeface featured on your site with your brand. Unique, consistent typography will help you establish a strong user following, build trust with your users, and help to carry your brand forward.

Typography has a profound effect on the way that users digest and perceive the information conveyed by the text. Eye-catching type is much more persuasive than weak fonts that don’t reinforce the message of the text.

Typography holds the attention of the readers

Good typography could be the difference between someone staying on your website for one minute or half an hour. It’s important that your website is visually stimulating and memorable, and typography plays a huge role in this process.

3. The different elements of typography

To get started in typography, you first need to get to grips with the eight essential typographical design elements.

There’s some confusion surrounding the difference between typefaces and fonts, with many treating the two as synonymous. A typeface is a design style which comprises a myriad of characters of varying sizes and weight, whereas a font is a graphical representation of text character. Put simply, a typeface is a family of related fonts, while fonts refer to the weights, widths, and styles that constitute a typeface. 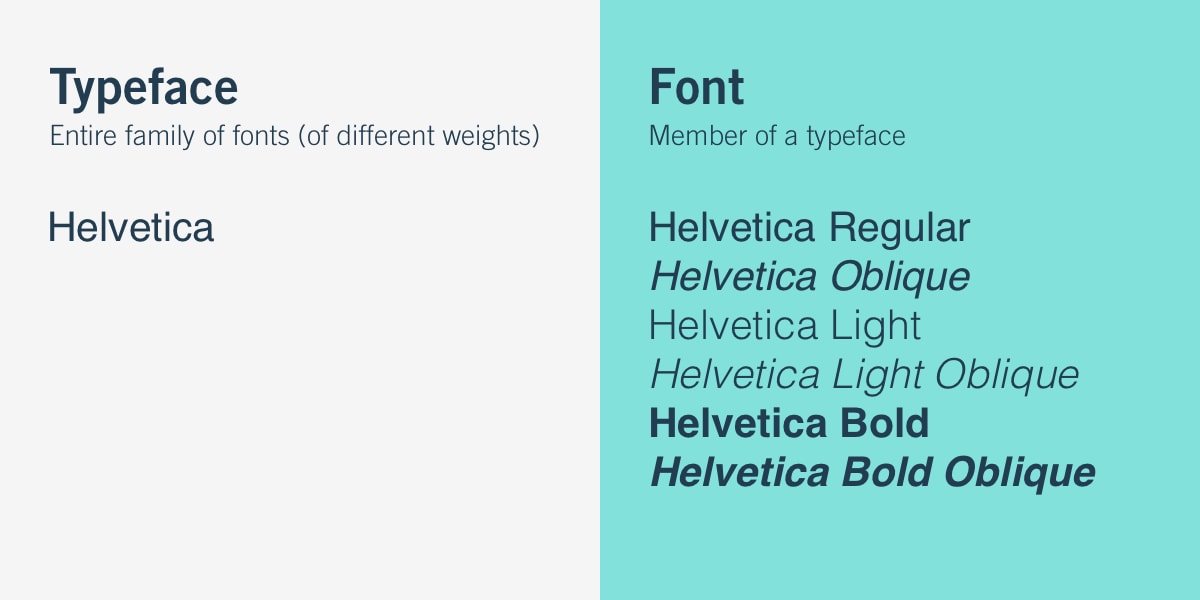 There are three basic kinds of typeface: serif, sans-serif, and decorative. To keep the interface uncluttered and streamlined, a good designer will never use more than three fonts—and keep decorative fonts to a minimum. Most UI designers will pair serif fonts with sans-serif fonts, such as putting main body text in a serif font and putting your title in a sans-serif font, or vice-versa.

Much like hierarchy, contrast helps to convey which ideas or message you want to emphasize to your readers. Spending some time on contrast makes your text interesting, meaningful, and attention-grabbing. Most designers create contrast by playing around with varying typefaces, colors, styles, and sizes to create impact and break up the page.

Keeping your typefaces consistent is key to avoiding a confusing and messy interface. When conveying information, it’s essential to stick to the same font style, so your readers instantly understand what they’re reading, and begin to notice a pattern. While it’s ok to play around with levels of hierarchy to some extent, it’s good practice to establish a consistent hierarchy of typefaces (one consistent font for headers, another for subheadings) and stick to it.

Often referred to as ‘negative space,’ white space is the space around text or graphics. It’s often overlooked and tends to go unnoticed by the user, but proper use of white space ensures the interface is uncluttered and the text is readable. White space can even draw attention to the text and provides an overall aesthetically pleasing experience. White space often takes the form of margins, padding, or just areas with no text or graphics. 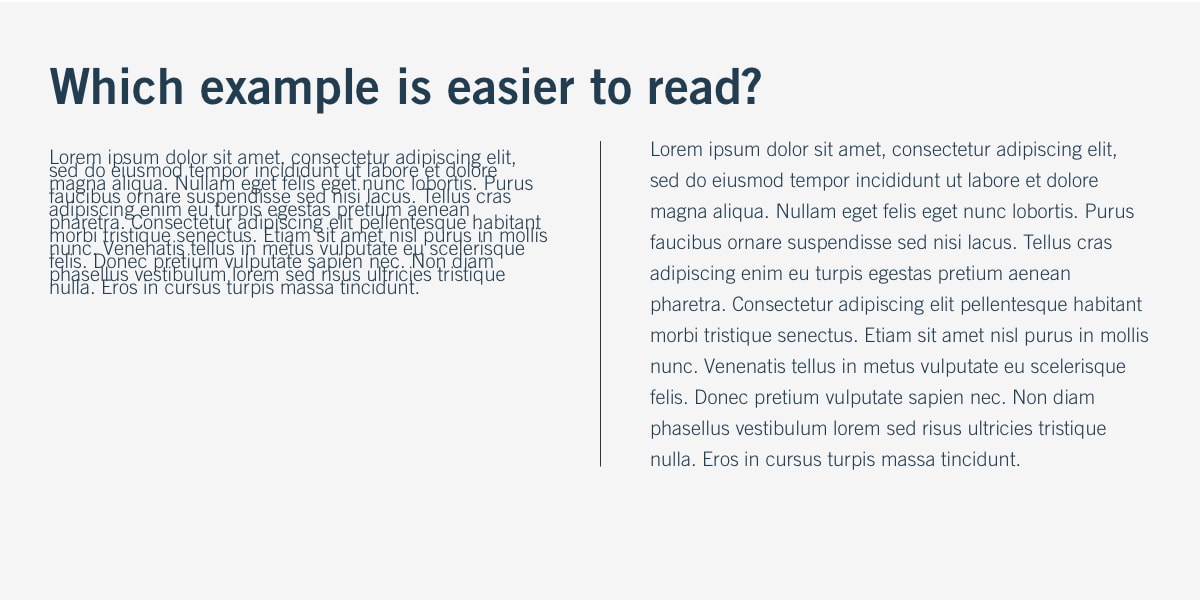 Alignment is the process of unifying and composing text, graphics, and images to ensure there is equal space, size, and distances between each element. Many UI designers create margins to ensure that their logo, header, and body of the text are aligned with each other. When aligning your user interface, it’s good practice to pay attention to industry standards. For example, aligning your text to the right will seem counterintuitive for readers who read left to right.

Color is one of the most exciting elements of typography. This is where designers can really get creative and elevate the interface to a new level. Text color, however, is not to be taken lightly: nailing your font color can make the text stand out and convey the tone of the message —but getting it wrong can result in a messy interface and text that clashes with the site colors.

Color has three key components: value, hue, and saturation. A good designer will know how to balance these three components to make the text both eye-catching and clearly legible, even for those with visual impairments. Often, designers will test this by viewing the text in greyscale (without color) and making tweaks if the text is too dark or too light against the background color.

Establishing hierarchy is one of the most vital principles of typography. Typographical hierarchy aims to create a clear distinction between prominent pieces of copy that should be noticed and read first, and standard text copy. In an age of short attention spans brought about by social media, designers are urged to be concise and create typefaces that allow users to consume the necessary information in short amounts of time.

Hierarchy can be created using sizing, color, contrast, and alignment. For example, if you have a line of copy with an exclamation mark icon at the beginning that is in red and larger than the previous copy, this is a visual clue to the readers that it’s a call to action. The most typical example of typographical hierarchy is size: headings should always be larger than subheadings and standard text.

4. How do you choose the right typeface for your website?

Now that we’ve familiarised ourselves with the different typography elements, let’s talk about the process of choosing typefaces for your interface. With so many different fonts and typefaces to choose from, it’s easy to feel overwhelmed. Making the right choice depends on so much more than just seeing what looks nice. Here are a few key considerations:

How do you want your users to feel when they first enter your website. Do you want to emulate a friendly atmosphere? Do you want the site to feel high-end, welcoming, playful, or serious? It’s imperative that the typography reflects the personality of the brand or product. A good starting point when faced with this challenge is to define the core traits of your brand, and start to gather typefaces that reflect these traits. From there, you can begin to notice a trend.

It’s equally important to consider how the font harmonizes with the tone of the message. For example, if you want to convey serious or important information, choose a less stylized or decorative font that is both clearly legible and will limit distraction.

Function is just as vital as form: there’s nothing worse than a website that looks pretty but is entirely illegible, leading you to click the wrong button or take a wrong turn because the instructions were unclear. When deciding what typefaces to include in your interface, set the style, aesthetic, and voice aside and reflect on whether the font is legible, readable, and accessible. Can the text be legible without strain? Are the characters distinct enough?

One thing that many designers often overlook is choosing typefaces that are web browser friendly. Commonly used font libraries such as Google fonts offer web-based font files that can be rendered perfectly in a browser without any issues. Pro tip: when downloading web fonts, never download more character sets than you need to. This way, you’ll avoid excess weight!

If you’re not sure where to start, take some time to see what other people are doing. Open your eyes to the typography that you see around you. Can you notice similar patterns? Can you see good and bad examples of typography? Even following typography hashtags on social media or looking up typography on Pinterest will give you some good ideas of what’s out there. You can also look to these eight typography trends for further inspiration.

Take some time to test

The best way to decipher which font to use for your interface? Test, test, and test! By gathering useful feedback from real users, you’ll get a clearer insight into what works, what doesn’t, what is legible and what feels counterintuitive or clunky.

Typography is often overlooked, but it’s a crucial component of user interface design. Mastering typography will see you well on your way to becoming a fantastic UI designer! If you’re not sure where to start, why not head to your favorite websites and start making a note of what typefaces they’ve gone for.

Keen to learn more about UI design? Check out these related blog posts: