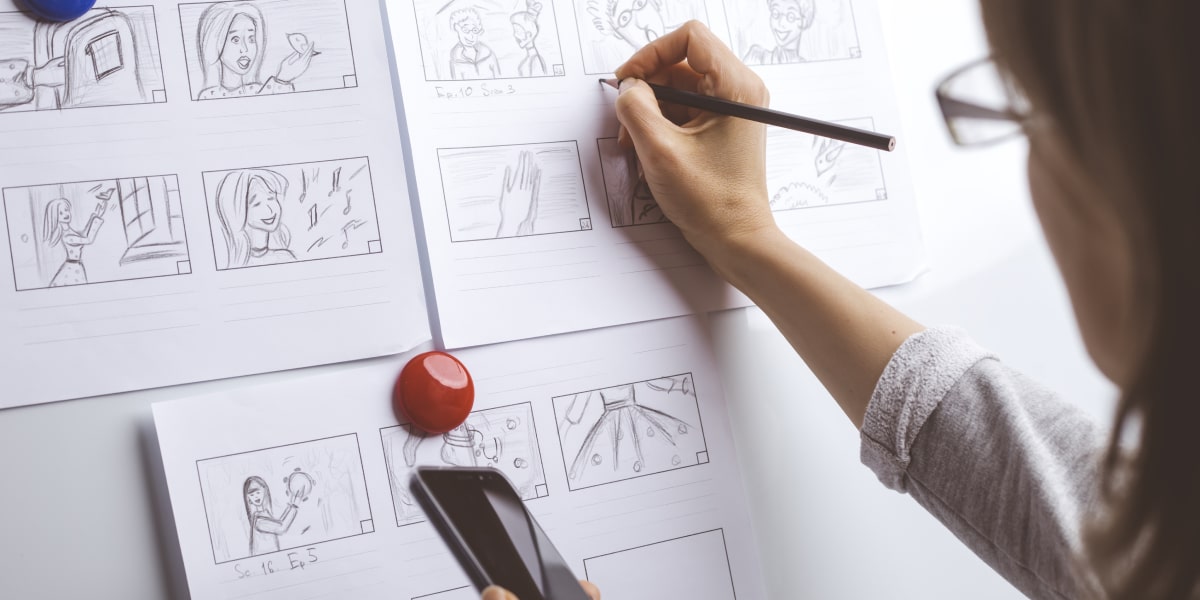 Perhaps you’ve heard the term “storyboard” before from a character in a glamorous (and incredibly unrealistic) movie portrayal of an advertising agency. Or, maybe it brings to mind a flurry of sketches tacked to a wall surrounded by creative types squinting at them with lowered brows, fingers stroking visible—and invisible—beards as they analyze the work in front of them. The word “storyboard” could even mean absolutely nothing to you at all; you may have arrived at this post because you’re curious to learn more.

Whatever your particular knowledge of the term, by the time you finish this article, you’ll have a much better understanding of what a storyboard is, why you might need one, when to use it, and a whole host of additional relevant information. Here’s what we’ll cover:

So: what is a storyboard? Let’s get started!

1. What is a storyboard?

Let’s begin with the basics. A storyboard is a graphic portrayal of a narrative, concept, or script, divided into sequential scenes (panels). They are generally used to map out how a script or story will look once it is animated or acted out, but people utilize them for a variety of situations.

Think of the classic parable, “Goldilocks and the Three Bears.” If you were to create a storyboard for this tale, perhaps the first panel would show Goldilocks looking a little worse for wear in front of the bears’ house. The next few scenes would portray her eating different porridges with a sour look on her face, followed by a drawing with her eating yet another bowl of porridge, this time with a smile. The images break down the story into bite-sized scenes and help people visualize how it will come to life.

“Storyboarding” is simply the act of creating a storyboard. For the best results, you’ll need to strike a balance between providing enough visual information to be able to tell the story so others can understand it and making it overly detailed. Some storyboards can be very rough and simple; other times, they can be very elaborate. It depends on the situation, how much time you have, and what stakeholders (your team, clients, etc.) are looking to use them for (more on that later). 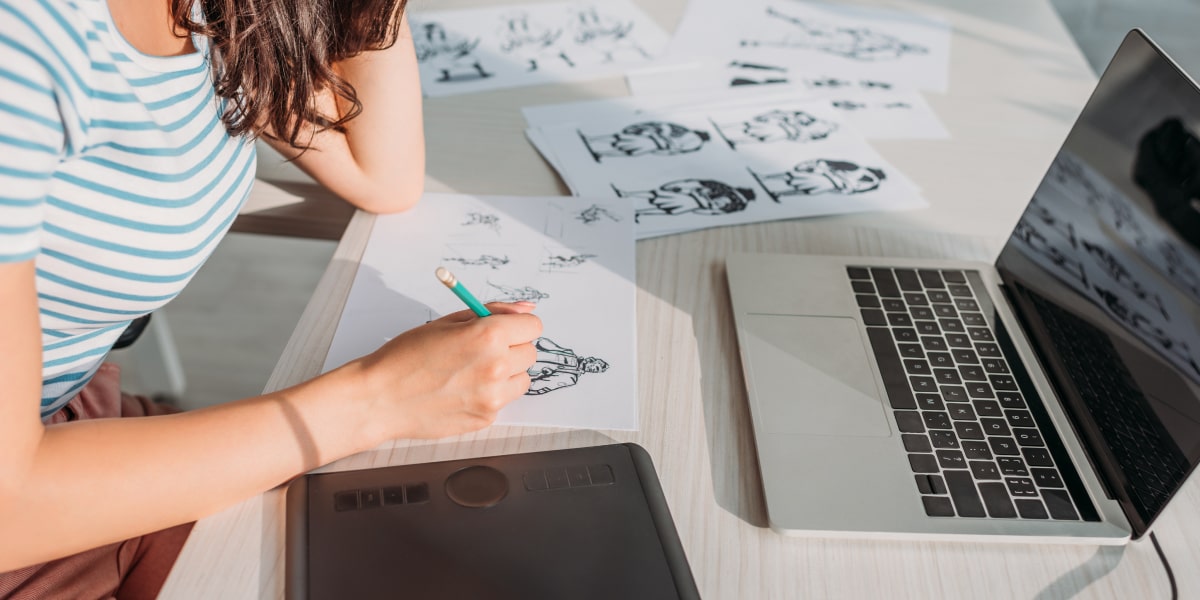 2. When and why do you need a storyboard?

Stories are an excellent way to communicate information. They make it easier for people to understand complex concepts and tend to be more interesting than informative text. And since graphics are more straightforward than the written word, a storyboard can break down even more communication barriers. Given their versatility, it makes sense that people use them in a variety of situations.

People typically use storyboards to map out scenes that comprise a movie or an animation. As a visual medium that’s ideal for storytelling, video is incredibly popular for marketing and sales collateral, product use instructions, and even pitching internal strategies. Marketers use videos to explain complicated value propositions, map out customer journeys, and entertain potential customers to boost brand awareness.

Storyboarding helps ensure the message is on point and achieves the intended goal, and that the scenes all work together fluidly before moving onto any actual film production—which can save quite a lot of money in the long term!

While storyboard use is rife across virtually all industries, the movie industry heavily relies on them, especially for animated films. Filmmakers use them to pitch to studio bosses, tweak storylines, and map out scenery, among other things.

Storyboards are also excellent teaching vehicles for educators, especially when young children are the target audience. They can be low-budget (poster board, anyone?) and easy to create without a lot of resources. Even better, they can illustrate concepts that youngsters may have trouble remembering without a visual aid, like how to wash their hands properly or how to react in case of a fire or other emergency.

What are the advantages of using a storyboard?

A storyboard can help get everyone on the same page quickly. Humans process images a stunning 60,000 times faster than text, which means that no matter how brief you make your pitch or presentation, it will ultimately take longer for people to understand it because there are words involved.

In addition to communicating ideas faster, a storyboard is also a great way to hone an idea without going too deep into further production. A script or a concept can sound amazing in principle, but you may create a storyboard and realize it just doesn’t translate well into visual scenes.

A storyboard is an especially important part of the animation design process. Just like for any video, it provides a visual map that communicates the script or narrative, but it can also include critical requirements that will give clients an idea of cost and time to produce. Establishing these parameters before moving forward into the drawing phase will lead to a much smoother process down the line, trust us!

Finally, storyboards are also helpful to video editors, as they’ll be able to use them as points of reference to ensure the final cut adheres to the original vision.

So now you know why storyboards are so important and who uses them. Now onto how to create them! 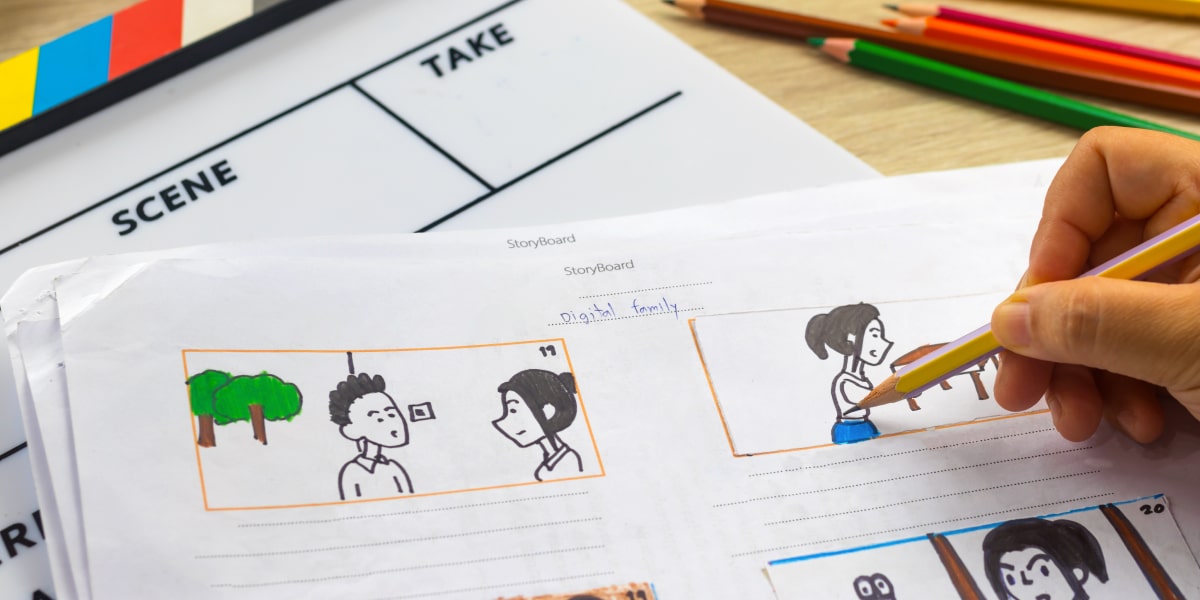 3. What elements make up a storyboard?

A basic storyboard’s components are very straightforward. In their basest form, all you’ll need to start is a concept, script, or story—this forms the basis for what you are trying to communicate through the visualization. However, the most comprehensive storyboards will include several of the following components:

Let’s move onto the types of storyboards you can create.

4. What are the different types of storyboards?

Storyboards have evolved over time. What started as a way for Walt Disney Studios to explain the production process to animators in the 1930s is now a ubiquitous part of the film process and quite helpful in a multitude of situations. Part of that evolution has included branching out beyond the traditional pencil-on-paper version to digital. So, what are the different types of storyboards you can create today?

A traditional storyboard is probably what most people envision when they hear the term. The designer will typically use pencil to create conceptual sketches that form the basis of a movie or animation. The panels are detailed enough for the production team and client to comprehend the narrative but are intentionally rudimentary, so if changes need to be made, the designer can complete them quickly and efficiently.

Thumbnail storyboards are used to hash out details of a scene in a movie. Though tiny and loosely drawn, they are more granular and detailed than a traditional storyboard because they include the type of shot you want for each part of the scene and how to position the camera.

Many agencies and animation studios rely on digital storyboards to show what the final cut of an animation will look like. They design characters and scenery on computers, so by sharing a digital storyboard with a client, they achieve two goals with one output. The client can see the character style and review the scenes, shots, and narration, all in one fell swoop. Pretty handy, right? 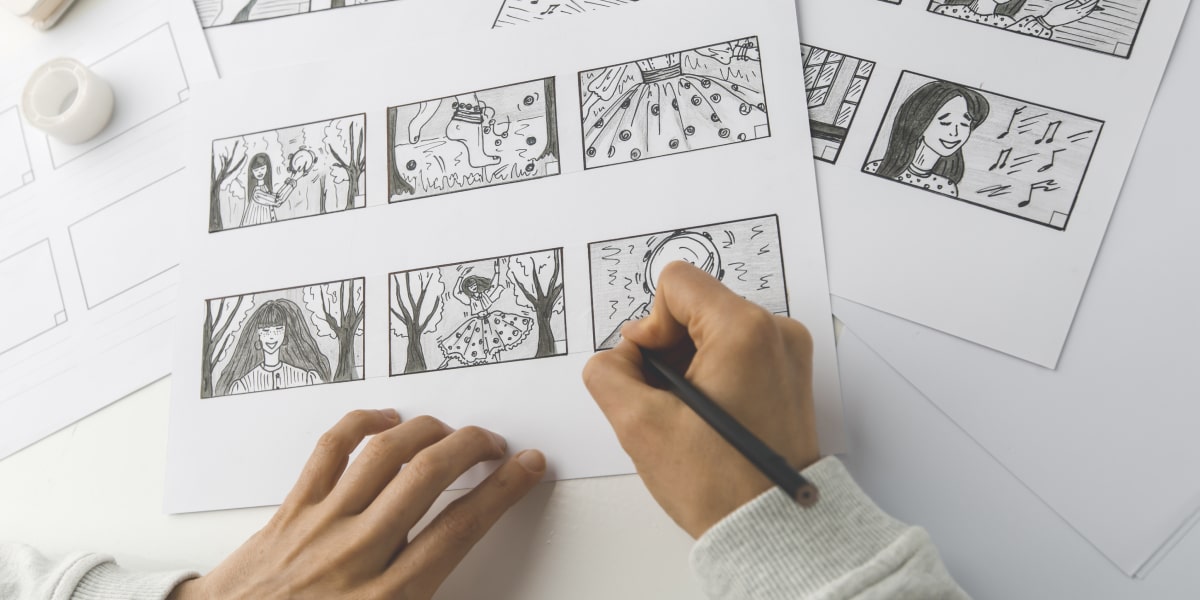 5. How to make a storyboard

For your first storyboard, start simply. You’ll need to start by creating a script (or at least have a concept you can elaborate on with relative ease).

Once you have a script or some general notes on a narrative, you can start fleshing out ideas for portraying it visually in different scenes. A two-column chart can be helpful for this step. In one column you’ll include the script; in the other, you can start jotting down rough sketches of what it could look like.

When you’re satisfied with your chart, you can begin creating the storyboard, opting for either the traditional or digital version. If you want to get more detailed, first do your thumbnail storyboard and integrate it into your final product. Let the drawing begin!

For a more in-depth tutorial, check out this complete step-by-step guide on how to create a storyboard.

6. Key takeaways and next steps

So there you have it! Now you know what a storyboard is, how to use a storyboard in a variety of situations, why they are so helpful, the different types, and even how to create your own. If you’d like to learn more about animation but are completely new to the world of design, it’s worth easing in with a free introductory UI design course. At the same time, you can delve deeper into the fascinating topic of animation design with these articles: