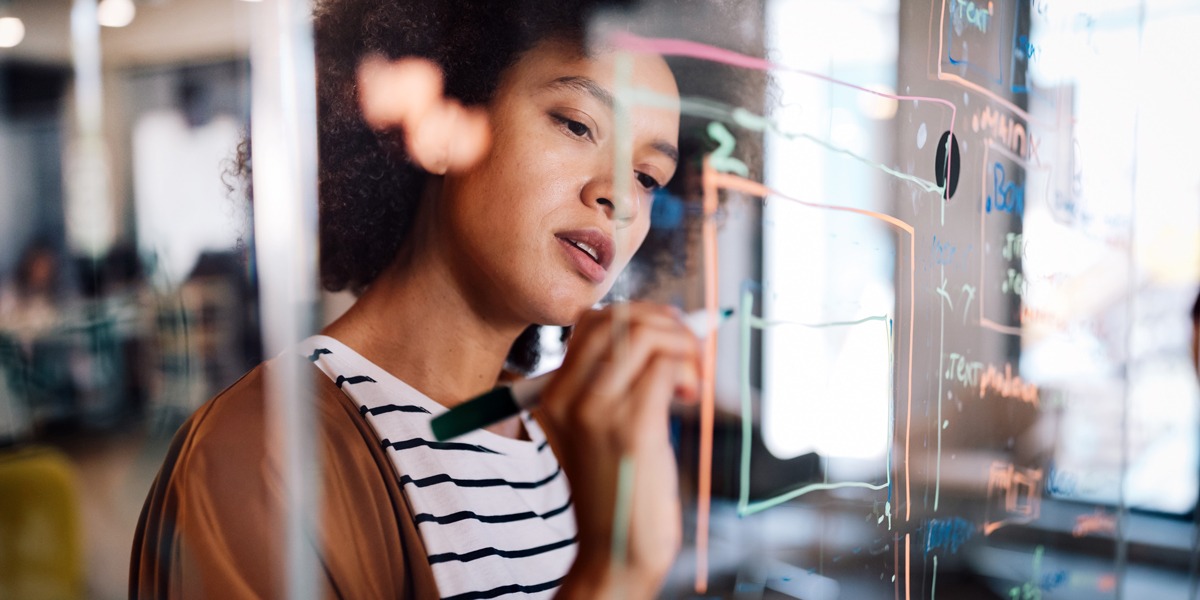 Design thinking is a powerful framework with the capacity to revolutionize your approach to just about anything.

Over the last decade, the practice of design thinking has made its way into a variety of other disciplines and industries. In the past, employers may have thought of design as something only for artists or other creative professionals. Nowadays, CEO’s and hiring managers across many disciplines are calling on designers to improve their products or services.

We’ve rounded up five examples of how design thinking can have incredible effects on a company’s success as well as a huge impact on the world around us. For each example, we’ll go over how each organization used the design process to improve their services and what we can learn from their experience. Here’s what we’ll cover:

1. What is design thinking?

A designer’s biggest task is to identify and solve existing problems with a product and leave users happier than they were before. At times this task can seem overwhelming and hard to grasp. The process of design thinking consists of five steps that designers use to organize their information and find meaningful and successful solutions to a problem. The design thinking steps go like this:

The idea behind design thinking is to keep the user in mind from beginning to end. With the user at the forefront, designers can move between these five design thinking steps to create problem solving products with the potential to change industry standards and even lives.

In 2016, Braun and Oral B recruited the expertise of designers Kim Colin and Sam Hecht, founders of the London-based design studio Industrial Facility, to create a smarter electric toothbrush.

When they initially partnered with Braun and Oral B, the manufacturers suggested Colin and Hecht design an electric toothbrush with a variety of sophisticated data-tracking features including a music player, ways to sense how well the user’s were brushing every single tooth, and even how sensitive their gums were.

However, Hecht and Colin quickly advised them to think more about the customer’s experience as opposed to their own vision for the product. They suggested how a few simple additions to the brush could solve many of the frictions their user’s were reporting. Hecht and Colin added on-the-go, USB charging and made it easier for user’s to order replacement brush heads, both problems that Braun and Oral B consumers had already expressed.

The result was an exceptional product that took user feedback into consideration to boost sales and increase customer loyalty.

Using the design thinking process to find better ways to serve a community can have profound effects on the lives of its members. Take Danish design agency Hatch and Bloom’s creation of The Good Kitchen as an example.

In 2007, Denmark had over 125,000 elderly citizens relying on government-sponsored meals. Hatch and Bloom were called upon by the Municipality of Holstebro to design a new and improved meal delivery service for these citizens. What came to fruition was a service with greater quality, more freedom of meal choice, and more flexibility for not only the elderly citizens receiving the meals, but also the chefs and other employees responsible for cooking and delivering them.

How did they create such a superior service? One of the most notable actions Hatch and Bloom took was the decision to interview and prototype with both consumers and chefs. They found the things that meal recipients were desiring was similar to what the chefs requested as well—a more dignified service with a greater variety of food options.

By listening to their concerns, hearing their pain points, and testing out new options, Hatch and Bloom found ways to keep both their customers and employees happy and healthy.

It’s hard to believe that the ever-successful start-up Airbnb was once making less than $200 per week. What grew their revenue and transformed Airbnb into a billion dollar business? Lots of experimentation, risk, and thinking outside of the norm.

Joe Gebbia and Paul Graham, co-founders of Airbnb, remember going over numerous charts, graphs, and codes with their design team trying to find some clue as to why their growth was nearly zero.

It wasn’t until Gebbia began moving through the app like a user that he realized why no one was wanting to book a stay—the pictures looked terrible! Without any data to back their next decision, Graham and Gebbia decided to rent a camera, travel to New York and spend some time with their customers to replace the amateur photos with more professional-looking ones.

A week later, their revenue nearly doubled. By taking a risk on a non-scalable solution, Graham and Gebbia witnessed their dwindling start-up transform into a thriving enterprise that revolutionized the travel industry.

The design team at UberEats is constantly accessing design thinking principles to fuse modern, state-of-art technology with the antiquated and fundamental act of enjoying a meal.  And it’s safe to say that they’ve had a pretty successful project.

One thing that really stands out about the UberEats design team is their adherence to the design thinking process. They seek to empathize with their user’s experience so much that they’ve implemented The Walkabout Program—a quarterly event where UberEats designers are sent to a city to learn about it’s transportation infrastructure, delivery and restaurant industry, and it’s overall food culture.

In addition to this immersive design technique, UberEats designers iterate quickly and innovate constantly. They participate in rapid field testing, where designers are interviewing and prototyping with the people who will be using the product the most: restaurant workers, delivery drivers, and the meal recipients.

You can even apply design thinking to your own personal development!

In this book by Bernard Roth, academic director and professor of Engineering at the Hasso Plattner Institute Design at Stanford University, the design thinking process is used to encourage individuals to accomplish the things they’ve always wanted to but never could.

Whether you need help breaking bad habits or creating positive ones, Roth says the design process can help people make meaningful changes in their lives. Many individuals have attested to this method with their success stories using the design thinking process to lose weight, battle anxiety, or even start a new business.

Roth encourages people wanting to make a change in their lives to first empathize with yourself and ask questions like, “How would I feel if I solved this problem? What would it do for me?” He then says to use the answers to these questions to define the problem at hand, much like the second step in the design thinking process.

Next, Roth urges people to brainstorm solutions to their problem and not to be shy when trying them out. Instead of just thinking about your problem and how it could be solved, Roth encourages the use of the design thinking process to turn your ideas into actions and enter into an iterative cycle within your own life—tweaking and testing solutions until you find what works for you.

These examples of design thinking show just how impactful this methodology can be when solving problems.

Whether it’s a new app, a community service, or a physical product, the best thing you can do to innovate successfully is keep your user in mind at every step in the design process. It can be tempting to create a flashy, high-tech product.

Instead, focus on what your users are asking for.

It’s easy for designers to become disconnected from their user. Don’t be afraid to take risks and immerse yourself in the lives of the people who will actually interact with your product. Then implement their feedback and test your results. Eventually you’ll land on that final iteration with the potential to change the world around you.

If you’d like to learn more about design thinking, check out these other articles: