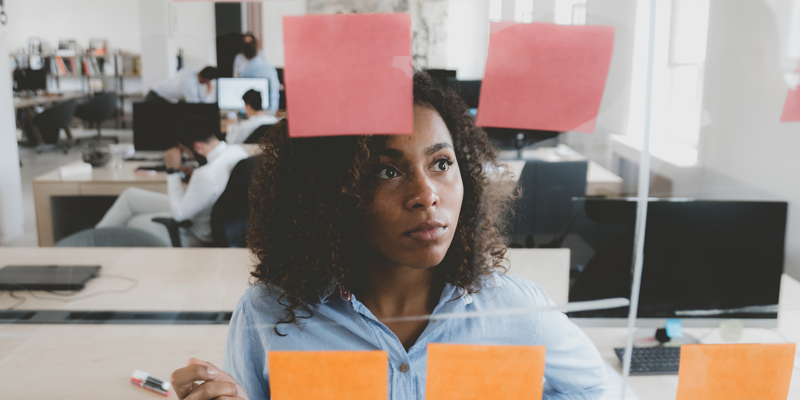 The increasingly competitive nature of the digital product development space means there’s more pressure on designers than ever before — not just to deliver better products than everyone else, but also to deliver them faster than everyone else. That pressure has ushered in a new age of agile working, which allows design teams to gather user feedback early and iterate quickly. Enter, Lean UX: a collaborative design approach based on agile working, that focuses on problem-solving and minimizing wasted time.

Based on the lean-agile methods of making the design process incremental, Lean UX is a design strategy focused around minimizing wasted time and effort during the design process. While that might sound simple enough, Lean UX has recently taken the design world by storm, with many proclaiming that it’s the epitome of design method evolution.

If you’re none the wiser about Lean UX, and the term itself makes you conjure up images of UX that is somehow skinnier than normal UX, we’re here to help. In this article, we’ll get to grips with the newest UX method on the block — providing you with an overview of the thinking behind it, how it differs from conventional UX, and give you some insight into why the design world is ‘going lean’.

Everyone’s heard the cautionary tale of the architect who didn’t make enough floorplans. Content with having the homeowners on board during the initial planning phase, the architect plows on with confidence — unaware that the homeowners have since changed tastes and grown their family. The architect has to then tear down the home and start again from scratch because the end result didn’t work with the homeowners, costing millions of dollars and wasting months of everyone’s time in the process. What the architect should’ve done to avoid such a mess was to create basic floorplans at each stage, ensuring they had the homeowners’ full approval before a single penny was spent.

The same goes when it comes to the design cycle. All too often, designers will go full-steam ahead with the product, and then either the requirements change or the stakeholders just aren’t happy with the result. This makes all those months of hard work and research obsolete, and the entire team has to go back to square one — costing the company time, money and resources.

This is what Lean UX aims to change.

Based on the popular Agile Design Method wherein the design phases run parallel alongside each other rather than following each other linearly, Lean UX is a collaborative, user-centric approach to design that focuses on minimizing wasted time, money and resources during the design cycle. The Lean UX approach asserts that a product’s initial prototype will always be wrong and need improvement, so it encourages the creation of a minimal viable product — a product with the bare essentials needed to conduct user testing. This approach is all about finding solutions to the problems and then improving those solutions based on user feedback.

The process of finding these solutions is known as the assumption and hypothesis method. By looking at the problems, you should be able to come up with a problem statement which will then snowball into a set of assumptions — or, in other words, a statement that you believe to be true.

Creating your assumptions usually involves a team brainstorm, in which everyone comes up with a set of questions based on the problems to inform your assumptions. Once you have your assumptions, you can then come up with a hypothesis to test them. For example, you might hypothesize that adding a certain feature to the product will increase usability by 35%. If you are unable to prove your hypothesis to be true, you know that you’re heading in the wrong direction.

While naturally, Lean UX refers to a digital design process, it’s actually a derivative of Lean manufacturing — a long-standing technique involving minimizing unnecessary steps in the manufacturing process that do not have any direct value for the customer. It was first documented in the ’90s with reference to the Toyota Production System, during which the adoption of Lean manufacturing contributed to Toyota’s growth into one of the largest automotive companies in the world.

There are three fundamental phases of Lean UX:

…and keep repeating the process!

2. The core principles of Lean UX

Let’s take a look at each of these principles in more detail.

Act as one team

The first key principle of Lean UX is acting as one team. This means going against the tradition of delegating tasks based on skill and keeping design teams separate, instead bringing together designers, product designers, engineers, and developers to work together. Having a diverse team with a multitude of backgrounds and disciplines in the mix means you’ll come up with more diverse and well-rounded solutions to the problems brought up by the user testing. It also helps to foster a shared understanding of the consumer and the issues facing you in the design process. As you can imagine, this is often easier said than done — but it’s well worth the initial getting used to.

The second core principle of Lean UX is solving the right problems over the wrong ones. Lean UX relies heavily on a loop of continuous learning facilitated by continuous feedback. By receiving this feedback, the team will be able to hone in and focus on solving the right problem with a deeper understanding of the issue at hand. By working in small increments, i.e. a weekly feedback session that informs a week of work, you’ll be able to focus on finding a solution without any large risk. If your solution isn’t working and you need to reframe the problem, this way you will have only wasted a week — rather than, say, 3 or 4 months.

The third and perhaps most important principle of Lean UX is collaboration. In the design world, there’s a growing step towards ‘many hats’ job specs and away from limiting yourself with specific and specialized design roles. This increasing demand for designers who can work across disciplines is paving the way towards a collaborative future — a future where Lean UX will thrive. One way to facilitate collaboration between teams is to have a shared whiteboard or painted white wall that allows anyone to add their ideas and thoughts to.

The penultimate core principle of Lean UX is flexibility. In traditional UX, you’re always working with a high level of uncertainty — but the traditional approach is to try and change that. This is a different story in Lean UX, where you should always assume (no matter how well it’s going) that the plan is going to change — and therefore you need to plan accordingly. For example, your second round of user testing might mean that your initial assumptions are proved wrong, and you have to go back to square one. This might go against some people’s instinct, and many may instead be tempted to make some minor changes and continue on as normal. But being flexible is critical to the Lean UX process.

The fifth and final core principle of Lean UX is a de-emphasis on designing for deliverables. Where traditional design favors upfront work, Lean UX focuses on adjusting your design process as you go along in order to become more agile compatible. That’s not to say that Lean UX is devoid of deliverables; rather, it asserts that you should work out what conversation needs to be had in order to move forward to the next step. In short, Lean UX places emphasis on conversations rather than deliverables in the design process.

3. How does Lean UX differ from normal UX?

Where traditional UX places focus on detailed deliverables based on the user testing that was conducted at the start of the project, Lean UX focuses more on improving the product as you go along to ensure that the final outcome is the best that it can be. In Lean UX, you’re constantly asking what changes and improvements can be made in the here and now rather than waiting until you’ve got a finished product and then making necessary tweaks or improvements.

Finally, while traditional UX and Lean UX use largely the same principles when it comes to user testing, Lean UX tends to be a lot less meticulous and, in turn, a lot faster. Where traditional UX would spend months analyzing the feedback in extreme detail, Lean UX tends to cancel out the noise and look purely at the raw data in order to decipher what immediate changes need to be made. To boil it down, many think of Lean UX as being learning-oriented while thinking of traditional UX as being results-oriented.

4. What are the benefits of using Lean UX?

Without the privilege of expendable income for trial and error, Lean UX sits at the height of resourceful designing for startups. By allowing them to maximize output and minimize waste, design teams are able to pass through each design phase a lot quicker. On top of this is Lean UX’s collaborative nature, which builds synergy within the team and allows everyone to not only voice their concerns but to test them out.

There are also huge benefits of getting user feedback as early as possible. Getting an early insight into the usability of your product means better design decisions in the future. It also gives the designers a chance to experiment in the early stages without any huge repercussions — especially when it comes to the assumption and hypothesis method. This way, it’s easier to measure success and failure, and design accordingly. For designers, it’s a way of working smarter.

Overall, more and more designers are catching on to Lean UX as the design approach of the future. Hopefully, these benefits are robust enough to inspire you to ‘keep it lean’ in your own design approaches!