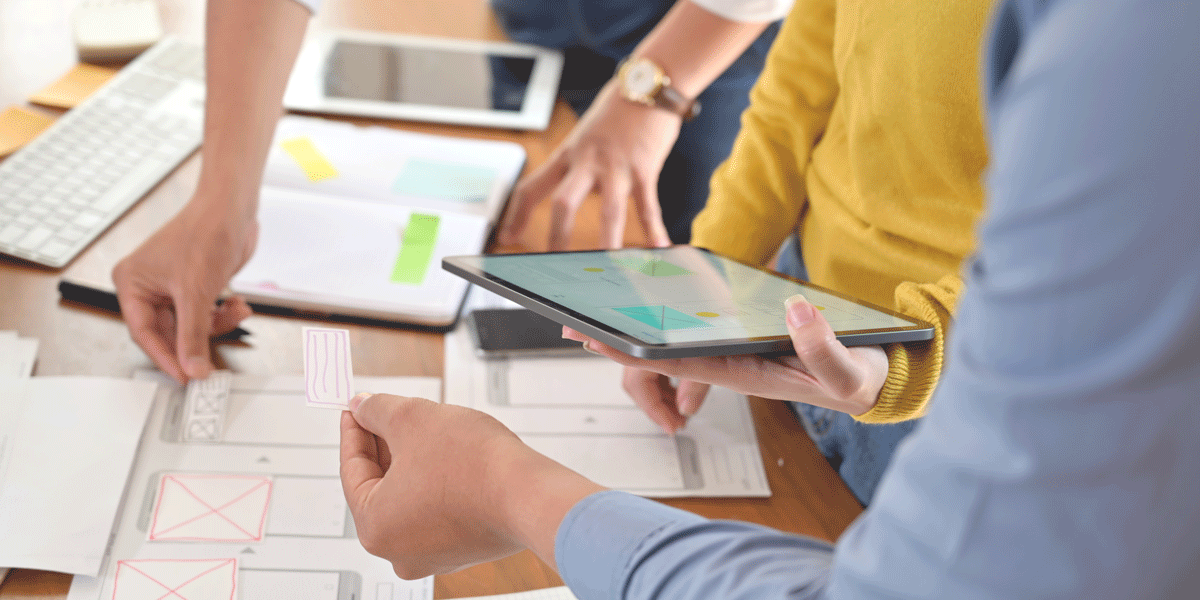 Prototypes are one of the most important deliverables of our discipline. They come in all shapes and sizes. We create them with everything from pencil and paper to fancy design software.

In this guide, we’ll explore one of the most useful yet intimidating prototyping techniques in the field: rapid prototyping.

1. What is prototyping? A recap

Before you spend time and money developing an idea or building a product, you need to make sure that it works as intended. You’ll want to test it to ensure that it’s user-friendly and bug-free, and that it helps the user to complete their desired actions.

To do this, you create a scaled-down version of your product—be it an app, a website, or a piece of software. This is what’s known as a prototype. Prototypes can range from simple paper models to fully functional digital prototypes that the user can interact with.

Once you’ve created a prototype, you’ll test it on some target users. You’ll see how users interact with the product, discover any usability issues and design flaws, and identify areas in need of improvement.

You can learn more about prototyping and all the different kinds of prototypes in this guide. Now, though, let’s get back to the focus of this guide: rapid prototyping!

2. What is rapid prototyping?

In order to understand rapid prototyping, it is useful to consider where the term comes from.

In much the same way, designers in the digital world have adopted rapid prototyping as a quick and cost-effective way to build and test a working version of their product. In digital design, rapid prototyping is the process of iteratively mocking up an interface and validating it with users, stakeholders, and even your teammates.

But what makes it rapid compared to standard prototyping?

In the manufacturing world, rapid prototyping is much quicker than traditional prototyping, which may take months or even years. When it comes to building digital products, however, it shouldn’t ever take designers months or years to build and test a prototype. So, in actual fact, all prototyping in digital design can be considered rapid. Prototyping tools like InVision and Prott showcase the nature of prototyping in the digital realm: they are designed to expedite an already speedy process, allowing us to stitch together screens in just minutes.

In a relatively short space of time, we build a prototype of a section of a product we’d like to validate. We then show it to users or our team to gather feedback, and make changes based on this feedback. This process lets us gather feedback early and often, helping us “build better products faster.”

3. The benefits of rapid prototyping

Better. Faster. Sounds pretty good, right? But what exactly does this mean for teams and designers?

Well, for starters, rapid prototyping gives us a visual to make sure we’re all on the same page. It isn’t the same thing to describe a product as it is to see it. And while we probably can get away with descriptions within teams since we all speak the same language, they are no good for stakeholders, investors, or users. A quick prototype eliminates miscommunication.

Rapid prototyping also helps us catch problems or pain-points early on in the design process. This lets us address and solve the problem before it gets to development or further into the process, saving us precious time and money.

Finally, continuously and quickly testing our work helps us validate that we’re building a product tailored to fit real user needs and wants. We’ll be showing our rapid prototype to them, and they’ll be able to let us know if it’s working or not.

Now we know what a rapid prototype is, let’s consider how to go about building one.

It is quite simple:

That is it! The process isn’t complicated and yet it’s hugely beneficial.

Creating a rapid prototype: How much do I build?

Prototyping an entire app over and over again is a ton of work! And even as a “master” prototyper, it’s not a quick process. It is also not necessary to build an entire app right off the bat. So what do we build?

Where will your users spend the most time? Which features will they use the most? Start prototyping here!

Hammer out critical areas of your app or website and make sure they are meeting user expectations, needs, and wants.

We’ve come a long way since the norm was seeing plenty of bad design like this around the web. Both in apps and on websites, we now see conventional structures and experiences. Users are familiar with these. When they see them, they know their way around them and how to use them.

Any time we’re creating something novel that departs from what users expect, we need to prototype and test. If you’re designing a crazy new login screen or a new, cool kind of checkout process, make sure you develop a prototype of it early on to iron out any kinks that will confuse users.

Prototyping isn’t limited to these two cases. You can prototype and test any section of your app. However, tackle one part or feature at a time. Don’t try to address the whole product at once or you’ll wind up with a prototype that is too big to let you be nimble.

A student recently asked me if rapid prototyping was limited to low fidelity. It isn’t. You can test at all different levels of fidelity. You’ll still work quickly, will still gather feedback, and will still revise to reflect it. The difference lies in the kind of feedback you’ll receive.

Low-fidelity prototypes let users focus on how they’ll work their way through a product. Does it make sense? Can you find everything? Do any steps feel off? They are common during very early stages of product development and fleshed out with pencil and paper. Fast, easy, and effective!

Mid-fidelity prototypes help us focus on interactivity. They help us validate the behavior of elements and screens. These are commonly created in tools like Balsamiq.

High-fidelity prototypes look like the finished product and are created in tools like Sketch or Figma. When users are presented with these, they tend to focus on their visual design, so they aren’t ideal during the early stages. We’ll typically use them towards the end to validate that our visual design decisions clearly communicate what they are meant to.

So which level of fidelity is appropriate? It depends on the stage of your project and what you’re looking to measure or find out.

If you’d like to learn more about the product design process, take a look at these guides: