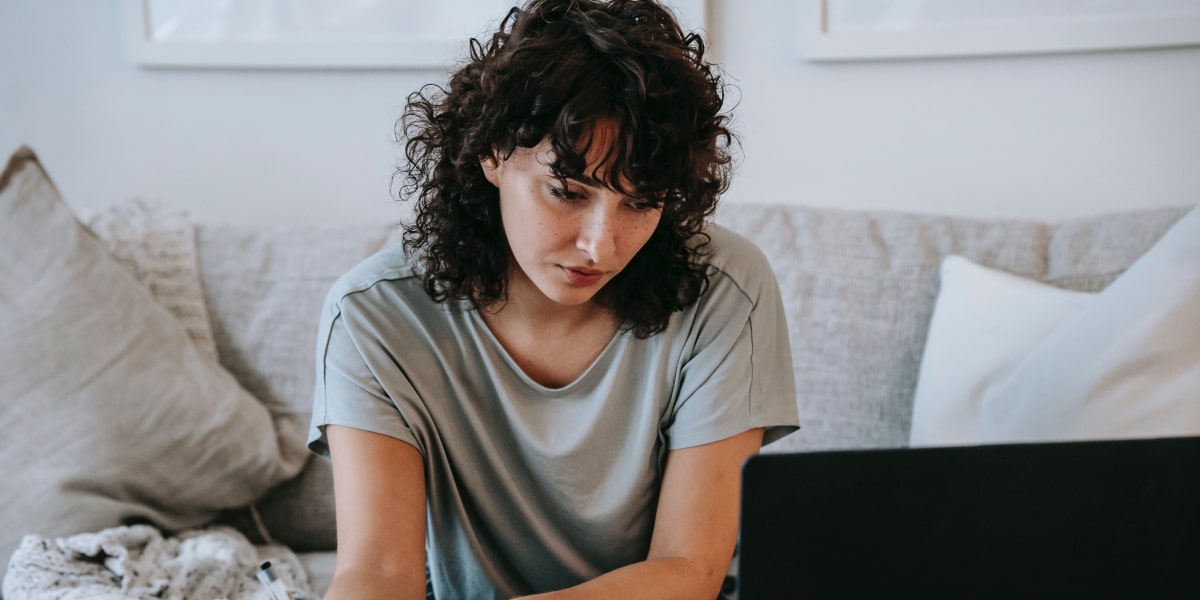 If you’re just starting to consider a career change, or you’re a new designer with a broad skillset, it might be a good time to consider a design specialization.

Over the last decade, the fields of UX, UI, and interaction design have exploded and salaries have increased dramatically, along with demand for these skills. The design of an app or website has become just as important as the functionality, which is great news for both users and designers!

But it can be a chore to understand the various facets of the industry and the many design specializations available to you. What are the various areas you could specialize in which one should you focus on?

In this post, I’ll go into depth on the differences between these fields so that you can have a solid understanding of what each of them entails and be as informed as possible when deciding which to focus on. If you want to jump to the definition of one particular field, simply select it from the list below.

1. UX design as an umbrella term

The first step to understanding the differences between these fields is realizing that they all live under one umbrella term: user experience design (UX).

If you think about it, this actually makes a lot of sense. Basically, anything that is part of how the user experiences the software–from the buttons they press to the text they input–is naturally part of the user experience. It’s that simple!

Now that you understand the term UX, we can begin to drill down to the specific fields within this umbrella term and define them. This is where things get a bit more complicated.

If you examine the graphic above, you’ll see that there are actually many different subsets of UX design. For the purpose of this article, we’ll focus on the ones that usually make their way into job descriptions and titles.

Even though UX design is an umbrella term, it still makes its way into job listings and job titles. However, the job duties are pretty specific. As a UX designer, you usually spend your time constructing flowcharts and wireframes, working with user personas, and conducting user research to decide which features should be created and how the software should function. That being said, user research is sometimes split into its own field as a specialization.

Explore a career in UX design if you have a knack for investigating, empathizing, and ideating for solutions. If you’re organized and a skilled communicator, even better. These are essential skills for UX designers. 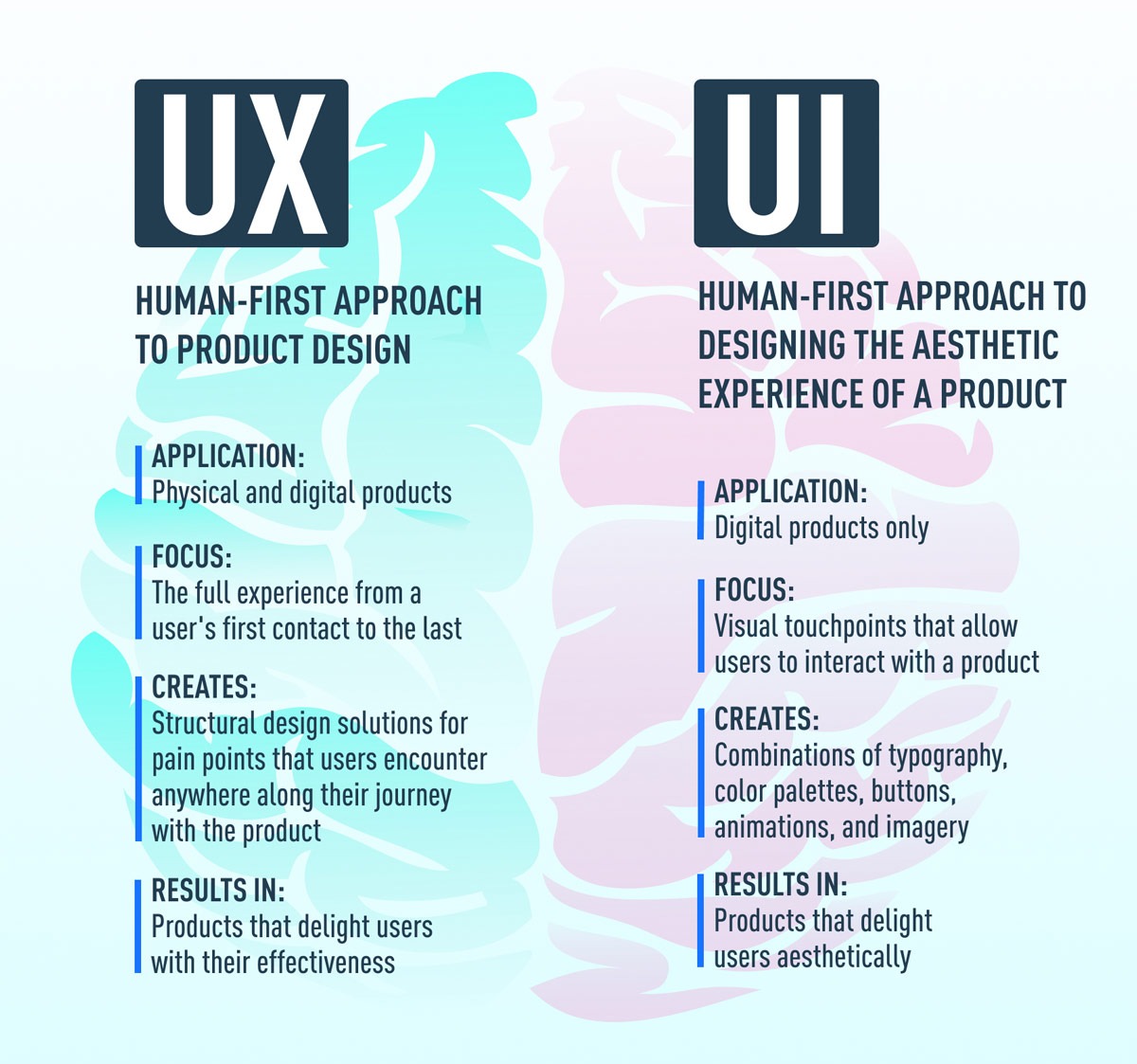 UI design is a field in its own right, but it can also be a design specialization for UX designers and other tech pros. UI design focuses specifically on the visual side of the software.

The UI designer is responsible for creating the visual language and identity of an app or program. Things like colors, spacing, font styles and hierarchy, button styles, and other aspects of the design are all part of the user interface and therefore fall under the domain of the UI designer.

Where the UX designer discovers and designs for the structure, flow, and functionality of a digital product, the UI designer works to make that functionality aesthetically delightful (even if it’s so seamless that users don’t notice). If you have an artistic eye and can bring that to find aesthetic solutions to user problems, a career in UI could be just the thing for you.

4. What is interaction design?

As another design specialization and field in its own right, interaction design focuses on how a user interacts with specific elements of the software. Interaction designers answer questions like what happens when a user clicks a button, or when a mobile app transitions between pages. They focus on things like animations, loading indicators, and page transitions.

Think of this as a more focused version of UI design that hones in on those specific interactions and how they move user forward in their journey. This could be a good career for you if you want to focus on a nice blend of functionality and aesthetics.

5. What is information architecture?

The information architect specializes in the organization of information. This could be in the form of a website, an online community or a search system.

Information architects support the usability of the website by making sure information is properly organized and accessible to the user. They have their own tools and methods at their disposal, such as sitemaps and card sorting.

As a design specialization, having a clear skillset in this area will help you approach product design with a critical eye.

If you have an eye for how information lands on the screen and you’re a skilled critical thinker, information architecture could be a great fit for you. 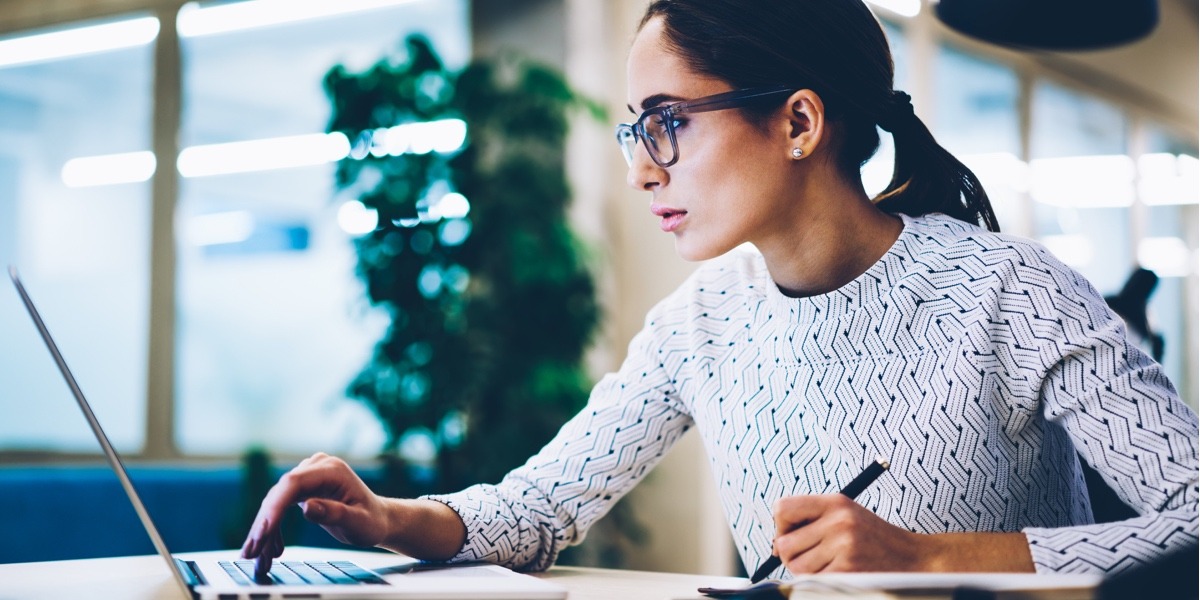 6. What is visual design?

This field is similar to graphic design, except it’s less about designing ads, banners, and other forms of media and more focused on designing for software. The visual designer is responsible for things like illustrations, graphics, and complex icon design.

Depending on the needs of the team and the product you’re working on, a visual designer may not be needed. They are most common in video game design, where interfaces are often very visual and skeuomorphic. If you’re an artist at heart, with a knack for technology, this could be a good fit for you.

Not all teams require a UX researcher, as this task can often fall on the UX designer. However, for applications where the user experience is particularly important, it can be extremely helpful to have a person dedicated to understanding the needs and desires of the users.

UX researchers spend most of their time talking to users, interviewing them and watching them use software as well as prototypes. This is called usability testing. If you’re good at connecting with people, compiling and analyzing research data, and communicating your findings in understandable ways, UX research could be a great career for you.

As a design specialization, candidates with a strong UX research skillset will appeal to employers who truly understand the need to connect with the actual needs, goals, and pain points of the actual human beings who use their products.

Learn more here: What’s it like to be a UX researcher?

You may have noticed that each of these design specializations is different, yet they sound rather similar and intertwined. It’s certainly true that there’s a lot of cross-pollination in these fields. Your exact job function depends on your role in your team and the team’s needs, and every team is different. For this reason, it’s important to understand what your role will be before taking on a new gig.

It can be tough to determine exactly what the responsibilities are from a job title or description alone. Job listing websites are full of titles like “UI/UX Designer” or the even more general “designer.” Part of the trick to finding the right job is to learn how to decipher these generalized job listings so that you can understand what the specific job entails.

If you see a listing for a “UX/UI Designer,” it can potentially mean a few things:

In any of these cases, it’s really important to study the job listing and requirements. The things listed at the top are usually the most important. Pay attention to phrases like “Nice to have” or “… is preferred”. This means that those skills are optional. So if they say “JavaScript Experience Preferred”, don’t worry!

You probably won’t be expected to code a functioning JavaScript app. The general thinking there is “the more skills the better”, so a lot of skills that aren’t exactly necessary end up creeping their way into job descriptions.

Of course, as you make your way through the interview process, ask as many questions as possible so that you can understand your exact responsibilities.

For a little more guidance in how to decipher job postings, check out this job ad teardown with UX pro Dee Scanero:

9. Why it’s a good idea to find a design specialization

Now that you have a solid understanding of the difference between the various design positions and what they entail, is it important to know both UX and UI in order to get a job? Or should you specialize in one design field?

It used to be okay to be just a “designer.” Being a generalist meant you could handle any requirements that were thrown at you. Of course, this made it hard to focus on any one aspect of design, but design wasn’t always as important as it is today. Being a UX generalist is a great place to start, but adding a specialization is a great way to stand out to potential employers.

One of the main catalysts for this new focus on form, and not just function, was the release of the iPhone in 2007. When the iPhone came onto the scene, it was the most well-designed smartphone on the market. The user experience of the phone is what gave it center stage. Its clean interface and touchability made it a drastic improvement over previous smartphones and enabled futuristic touch interactions that had never been seen before.

Other products began scrambling to keep up as consumers developed a taste for well designed products.

This design mentality spilled over into many different arenas like web design, operating systems, car entertainment systems, television sets and even home climate control, just to name a few. Fast forward to today and UI and UX design have become very lucrative and in-demand fields! Products have also become better designed in general, which is great for the consumer.

Because of this new focus on UI and UX, design specialization has become important. Companies have realized that it’s much better to have multiple people focusing on their specific fields of design rather than just one UX or UI designer who does everything.

We already discussed job titles and descriptions and how to decipher them. While you’ll still see generalized titles like “UX/UI Designer,” design job titles are becoming more focused. There are now many more job titles focused on subsets of UX, such as interaction design, UI design, or motion design.

Having a design specialization can really help you future-proof your career as demand for specialized designers grows. That being said, it’s important to have at least a basic understanding of other aspects of design. That’s why the CareerFoundry UI Design Program teach UX design principles as well as other subsets of design, like animation and sound design, instead of focusing only on UI design. This way, you can speak the language of other team members.

Think about it. If you’re hired as a UI designer, you want to be able to have a discussion with the UX researcher without all the terms flying over your head, right?

Design specializations are in huge demand. This means that salaries and the number of positions for both specialists and “cross-trained” designers are competitive.

The best way to capitalize on this demand is to focus on one aspect of design that you enjoy and can become an expert in, but to also make sure you have at least a basic understanding of other aspects of the field. This will make you much more marketable as a designer and drastically increase your odds of finding a career you love.

Understanding the differences between the various design fields is the first step to deciding which you should focus on. Hopefully you now have a much clearer understanding of UX design and the subsets of design that fall under this umbrella.

If you’d like to explore further into the world of UX design, here are some other helpful articles: