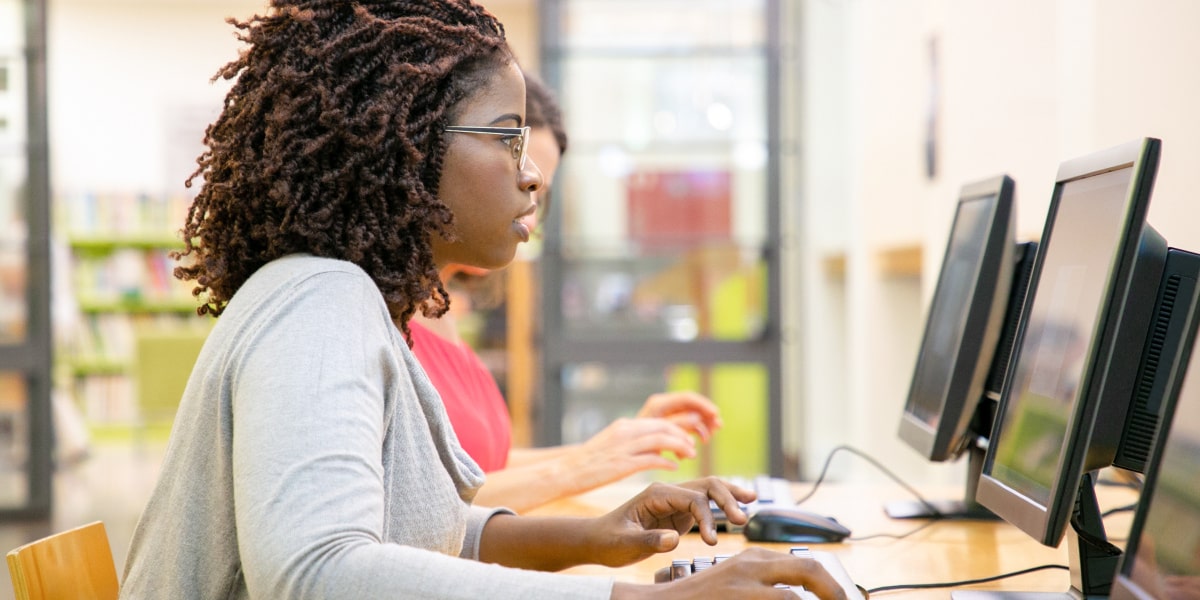 So you find yourself considering whether or not to get into coding—congratulations! First of all, it’s important to say that you’re not alone. There are hundreds of thousands (if not millions) of people just like you around the world who are looking to study web development to make a change. The number of languages out there—and of developers working with them—means that there is a barrage of information and advice facing you. But if you’re looking to hit the ground running, what is the easiest language to learn?

In this guide, we’ll deal with some important questions first, such as why learning to code right now is a great idea, as well as how to decide which language is for you. Because the answer isn’t as cut-and-dried as you might think, we’ll first explore what makes a coding language easier to learn. Based on that, we’ll set out what we consider to be five of the easiest programming languages for beginners.

If you’d like to skip straight ahead to our top five, or to another section that catches your eye, feel free to use the clickable menu: 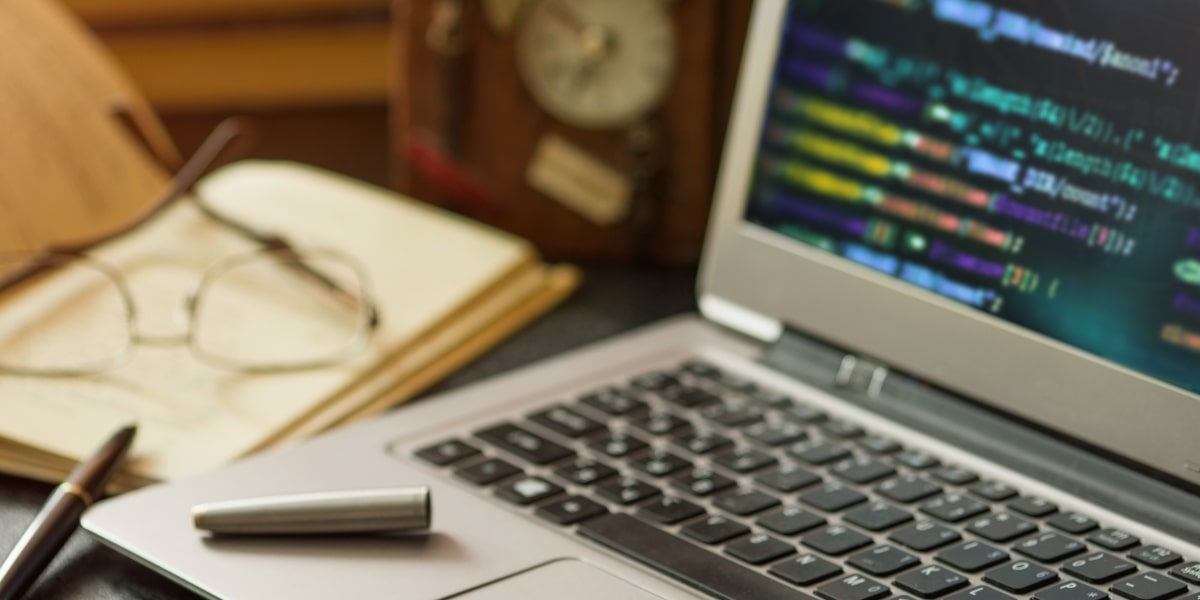 For the most part, this question is a no-brainer. These days, many people who are learning to code are not even aiming to become web or software developers. As digitization gathers pace and more roles involve collaboration with technical teams, being able to understand the potential and demands of coding is proving to be a major advantage across a whole host of jobs. Learning programming can give you an edge at being able to understand what is possible in your job, as well as what is not possible.

These days, there are a whole variety of different ways to learn to code. In fact, with so many different resources available, it can be important to work out which is best for your own specific learning style. For some, online video tutorials (such as the one following this section), are an excellent way to get started. The majority of them are free, and the combination of video and audio will help you understand what is being typed and why. In this video, our in-house web developer Abhishek explains how to get started from scratch:

For those who want to learn in a more intense interactive format, then web development bootcamps are a popular option. There are a wide variety, including many which teach coding purely online. If you feel like you don’t want to take the plunge quite yet, then taking an introductory course could be the perfect compromise. Much shorter and less expensive than a full program, these tend to focus on the easiest programming languages to learn—a nice way to get started in the field.

2. How do I decide which programming language to learn?

The answer that will disappoint you (but that you’ve probably been expecting) is that there isn’t one definitive easiest programming language to learn. Instead, there are three rough groups—several that are easier than others (we’ll get into that more later on), some incredibly hard ones for those unused to the nature of programming, and many which can be similar to other coding languages you might already know. For example, those learning Go (or Golang) would need to have a good knowledge of C first, as it is required for memory manipulation.

It also depends on what your ultimate goal is for learning programming—someone who is seeking to learn coding to get hired as a web developer will have vastly different priorities from a copywriter who just wants to learn a bit more about formatting languages to help with a WordPress blog. Think about what you want to achieve with coding further down the line; there can be a difference between what is the easiest programming language to learn and the best for you. So, what characteristics make for an easier programming language? Let’s take a look.

3. What makes a programming language easy to learn?

Quite often, it can be hard to pin down exactly what makes a language more accessible to beginners than others. A good place to start, however, would be results. How quickly can you start seeing the effects of the coding you’ve done? Languages such as HTML and CSS are useful in this respect, as you can quickly check the visual result of your coding.

Another important factor for newbie web developers in choosing a language is syntax. Just like deciding whether to learn a language like French or Japanese, how easy it is to read can be a major factor. The more difficult (or noisy) a programming language is with different numbers and symbols denoting different things, the harder it will be for humans to process it at first. For this reason, languages like Python are good for beginners, as they include a lot of whole words in their syntax. Remember that a computer doesn’t really care how simple or clean syntax or code is—it’s humans that will struggle.

There are several other factors affecting whether a language is easy to learn or not. These include how big or receptive its community is for supporting learners, as well as whether a language is static or dynamically typed. Dynamic languages are considered to be more beginner-friendly because they will run the code until they hit an error and stop there, whereas a statically typed language (such as Java) will not allow the program to run if there is an error in the code. This means that, essentially, with dynamic languages there is less time spent fiddling with tiny details. On top of this, their flexible nature allows for a wide range of uses.

So, bearing those things in mind, we’ve picked out 5 of the simplest programming languages to pick up right now:

Okay, so many web developers don’t technically consider HTML and CSS as programming languages, because they serve more of a structural than a functional purpose—however, others would argue that because they still give instructions to a computer, they do count as languages. Regardless of which side of the argument you choose, it doesn’t take away from the fact that learning HTML and CSS is a popular place to start when it comes to taking a first look under the hood of web pages.

Put simply, HTML tells the computer how to display a page, and CSS tells it how to style it. And this is one of the things that makes them both an easy-to-learn programming language, as you’ll get instant feedback on the code you’ve just typed. Simply refresh the web page and you can see the glorious effects of your coding—or where you’ve gone wrong.

CSS is a language which describes how these sheets themselves are styled, adding a bit of dazzle to your frontend. In just a few hours of practice with these two, you can quickly create beautiful web pages. In this video tutorial, Abhishek walks you through the basics of HTML:

PHP is a backend (or server-side) language which helps generate dynamic page content, such as the sending and receiving of cookies. Working primarily with databases, websites such as Wikipedia and Tumblr employ it. PHP is one of the easiest programming languages to learn due to its merciful nature, clear syntax, and thriving support resources. Most importantly of all, it’s free!

Due to its relatively straightforward syntax and emphasis on eliminating clutter, fast-growing Python is often seen as the easiest programming language to learn. There are lots of English words contained in the code itself, which is key to helping you avoid getting lost. Not only is it relatively simple to pick up, there are so many advantages of learning Python for web development right now.

The good news doesn’t stop there, however—as well as being quite simple to use (fewer lines of code = less work before you start seeing results) it’s exceptionally useful professionally. Python is employed in a wide variety of areas such as data science and web app development, and it’s even used by Google and Netflix. We’ve gathered several of the top real-world applications of Python for web development in this guide. Being fifth in the Most Loved and first in the Most Wanted lists of the 2021 Stack Overflow Developer Survey shows that learning Python is an excellent choice for beginners.

Native across all browsers, suitable for both frontend and backend web development, as well as being enduringly popular and useful, JavaScript is definitely one of the most useful programming languages to learn early. Together with HTML and CSS, it’s known as one of the pillars of the internet. Far from just a frontend language, over the decades it’s grown to be used for a wide variety of things, including coding software applications and even the Internet of Things (IOT).

Further down the line you’ll be even able to proudly boast that you are a full-stack developer, thanks to the arrival of the Node.js runtime environment in 2009. Once you’re professionally competent in the language, there’s another plus—JavaScript developer salaries are very enticing. As well as being important, getting started with learning JavaScript is easy. In this video, Abhishek gives a great beginner-friendly introduction:

A language which was designed to be accessible to people from a variety of different backgrounds and skillsets, Ruby is definitely one of the easiest programming languages to learn. With its easy-to-follow syntax, clean code, and lack of prerequisite theoretical knowledge, it’s designed for beginners. In fact, learning this language has gotten even better ever since it got the mother of all tune-ups—Ruby on Rails.

The Ruby on Rails framework adds many extra dimensions to the language, allowing you to build web apps increasingly quickly. It also allows you to do more, including use it for software applications, something PHP does not. While in a way a framework won’t exactly help your learning of the language itself, Ruby and Rails are an excellent lesson in how language and framework interact.

5. What are the next steps?

Now that you’ve worked out which are the easiest programming languages to start learning, think carefully about your approach to the learning itself. Spend plenty of time learning the fundamentals of that language, and gradually building up your knowledge. When it comes to the world of frameworks, trends, and new technologies, these can come and go. By gaining a mastery of the core aspects of a language and building good habits such as writing clean code, you’ll be investing your time wisely as a web developer.

Once you get further into web development, a great way of scoping out which programming languages are easier than others, as well as which to learn next, is the Stack Overflow Developer Survey. As well as a huge amount of other fascinating industry insights, it’s definitely worth your while making sure that the language you are interested in isn’t towards the top of their Most Dreaded list.

If you’re interested in taking a further look at the world of web development in 2022, then have a read of these articles: