What’s the Difference Between a Software Engineer and a Web Developer? 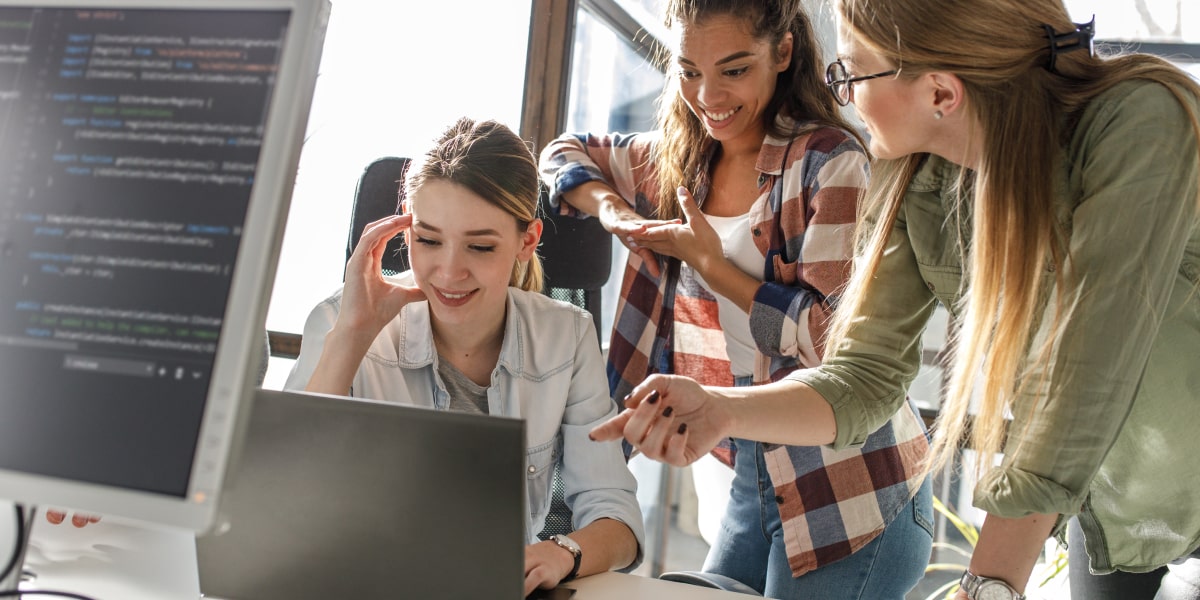 If you’re thinking about making the jump and learning to code and want to see what’s out there, things can get very confusing—fast. First things first, what is a programmer’s actual job title? Web developer, software engineer, software developer…web engineer? Fear not—help is at hand.

What’s in a name? The difference between software engineering and web development can be relatively simple. Where software developers might focus more on designing programs for computers (for example your antivirus software like Avast or McAfee), web developers concentrate more on building applications and websites for the web (for example, the CareerFoundry website).

For those of you looking to get into the field, decoding the actual terms is the first hurdle—this is why we’ve created a guide to the web development buzzwords you should know. Let’s start with the actual job titles themselves.

We’ll take a look at software engineering and web development and what they involve, as well as explain the terms software developer and web engineer, so that you can be clear on them. From there, we’ll look at what a typical educational program will involve, and how to decide which pathway is best for you.

If there’s a certain section that you’d like to read first, just use the clickable menu:

1. Software engineer or web developer—which term should I use?

In the US it’s more common for the term “software engineer” or “software developer” to be used, but that can change as well depending on the state. To give you a handy overview of the different terms and their popularity, this Google Trends graph illustrates it nicely:

Taken over the past five years, Google searches for “software engineer” are far more popular than the other three, with “web developer” and “software developer” battling it out in second. The much more niche term “web engineer” is well in last place, but we’ll explain it more later.

The divide between the two terms can vary again if you look at the trends globally, with a transatlantic divide definitely at work: 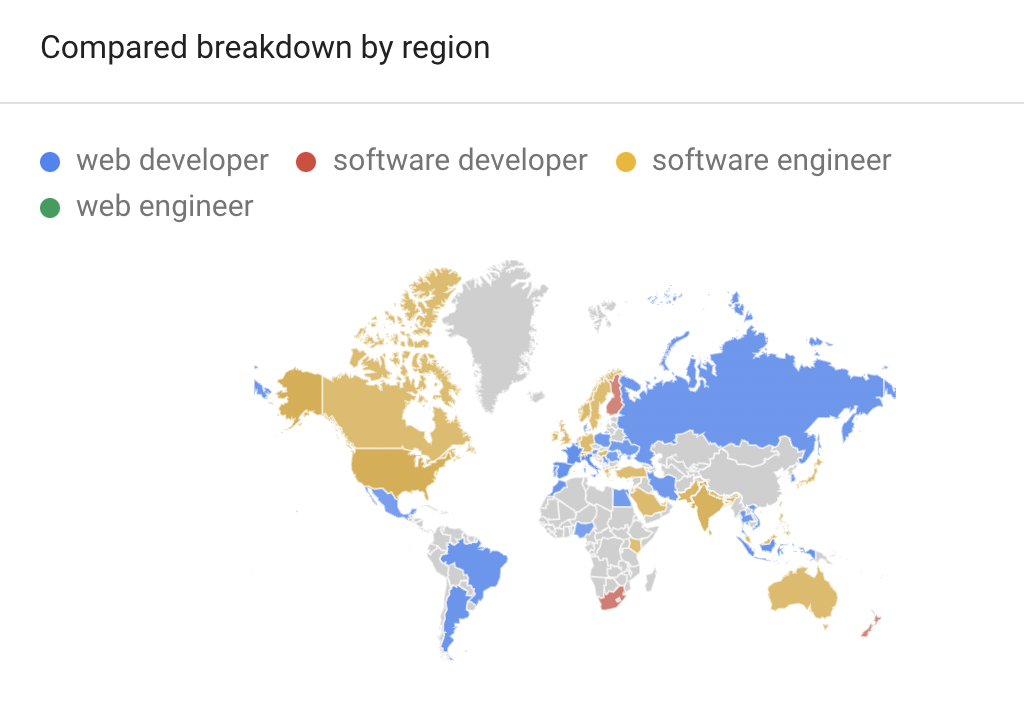 Outside of North America, web developers are generally more likely to be searched for lately. All-in-all, now that you see that different terms can appear depending on where you are and which company is mentioned, it’s time to explore each of these job titles to get familiar with the potential differences (and similarities) between them.

2. What does a software engineer do?

Software engineers typically work designing, testing, and building programs for hardware, operating systems, and networks. They are inclined to work much closer to the hardware than web developers.

Typical software engineering languages could include C++, Java, and Python. Again, many of these are going to be popular with web developers as well, due to their broad functionality and applicability.

The following are examples of sample responsibilities of a software engineer. Bear in mind that these are only to give you a sense of what to expect—the realities of the role can differ depending on the team, company, and industry you’d be working in.

3. What does a web developer do?

Originally, as the name suggests, a web developer is typically working more with websites, web apps, and APIs. However, it has to be acknowledged that the lines are quite blurred between web developers and software engineers, particularly when you compare jobs ads for the two. Depending on whether you’re a frontend or a backend developer, you can find yourself doing quite similar tasks as well as approaches to projects.

In terms of languages, similar to software engineering, these depend on what you are looking to do. While a frontend web developer would be working typically in HTML, CSS, and JavaScript, they are far from limited in which language they use. Backend web developers could be working more in Python, Java, and C, as they can be used more for working with databases and memory manipulation.

If you’d like to learn more about what they do, coder and CareerFoundry mentor Cyrille tells you more about his life in this beginner’s guide to what a web developer does.

4. Wait, so what does a software developer do?

This is where things get slightly more tricky. To keep things simple, the difference between a software engineer and a software developer can be that of scope. Software developers are able to design a system based on the needs of the customers. Software engineers, on the other hand, approach the issue from a step back. They typically work with other engineers to design a system that will be able to be used for a variety of customer groups or organisations.

Engineers work with the whole project process from start to finish, whereas developers tend to focus only on one section of it. As a result of this, software engineers are more likely to work with a whole team than a software developer.

5. …and what about web engineering?

Thought we were finished, didn’t you? Not quite. Web engineering is a type of approach to development itself. Think of it in a broader sense: It combines theory, research, and practical approaches for applying to web and application development.

Overall far more theoretical than the other two we’ve dealt with so far, it’s much less hands-on. So, if you’re more interested in a more multi-disciplinary, methodological way of approaching the web and technology, web engineering could be a path to look into.

Essentially, the biggest difference between software engineers and web developers isn’t their training, or the programming languages they know, but the work they carry out.

As a result, many consider the two labels almost interchangeable. The type of developer you are depends on your own direction of work—whether you’re a frontend web developer, an iOS app developer. Both titles can involve those who work more with machine learning or in the database side of tech.

On first look, attempting to differentiate the two titles by paycheck could work. According to our research on Glassdoor and Indeed, the title “Software Engineer” earns an average of 100,097 dollars in the United States. “Web Developer” earns a lower average base salary of 66,578 dollars.

However, it’s important to note that as we’ve outlined, these positions are too general to give you some real insight into what you can expect to earn in your career in coding. For that, we recommend that you look closer at the roles themselves. We’ve dug into the stats a bit more and created guides to JavaScript developer salaries, full-stack developer salaries, and other types of web developer salaries.

Now that we’ve got a sense of the different terms and how they are more similar than anything, let’s examine what you would cover when learning them.

7. What you would learn in a typical coding program

If you’re interested in taking your programming career to the next level by enrolling in a program or a coding bootcamp, it’s likely you’ll come across both titles. So which do you choose—a software engineering bootcamp or a web development program?

As we’ve seen already in this article, the differences can be completely in words alone. What’s more worthwhile is taking a closer look at the components of the course curriculum.

A good full-stack coding bootcamp should include (for starters):

8. Deciding which is right for you

It’s no surprise that software engineering and web development programs and bootcamps share a pretty similar curriculum. In general, in-person as well as online coding schools share the same aim—to train you in the building blocks of coding and getting you up and running as a qualified programmer.

If you’d like a taste of these building blocks, in this video our in-house developer Abhi gets you started:

Because of this, be sure to look for a coding bootcamp that will provide proper mentoring and a dedicated job preparation course. If you’re looking for more tips on how to pick the right one for you, we’ve created a guide on how to choose the right web development bootcamp.

As you’ve seen, the reality of the tech scene currently is that job postings can bounce between the title “software engineer” and “web developer.” Frustratingly, they can appear interchangeably depending on location, company, and even hiring manager.

Our key advice is not to panic if you’ve come from a program or bootcamp with the other label. It doesn’t necessarily matter what the label of your program of education is—it’s the skills, tools, and understanding of programming that they are looking for.

Because of this, it’s important that you examine each job posting thoroughly. Which languages, technologies, and frameworks are the company asking you to know, and to what extent? What is the scope of the role—will you be working mostly alone or in a team, will you be monitoring diagnostics and fixing bugs, or will you be overseeing a whole team or project? Once you’ve got a sense of these, then you can decide whether or not to apply.

If you’re still nervous about whether any of the roles are meant for you, it can really help to imagine yourself in the actual role. Because of this, we asked one of our resident in-house coders to go through a day in the life of a web developer.

When Shakespeare’s Juliet asked, “What’s in a name?”, she probably wasn’t referring to the difference between software engineering and web development. But there’s no way for us to know that that wasn’t what she was talking about. Right?

The moral of the story is, don’t worry if you are still a little bit confused about the difference between a software engineer and a web developer. Sometimes the difference can be in the scope at which you would be working, but as we’ve seen, the lines are incredibly blurred. However, as we’ve seen, that shouldn’t be a problem.

Whether it’s about deciding between bootcamps or between jobs at companies, what matters are the skills and technologies themselves. Just as it doesn’t matter whether Romeo was a Montague or a Capulet, it’s what’s inside that counts.

If you’re looking to learn more about the world of coding, or of changing careers in general, then these articles will be of interest to you: