What Web Developer Salary To Expect? Our Complete Guide 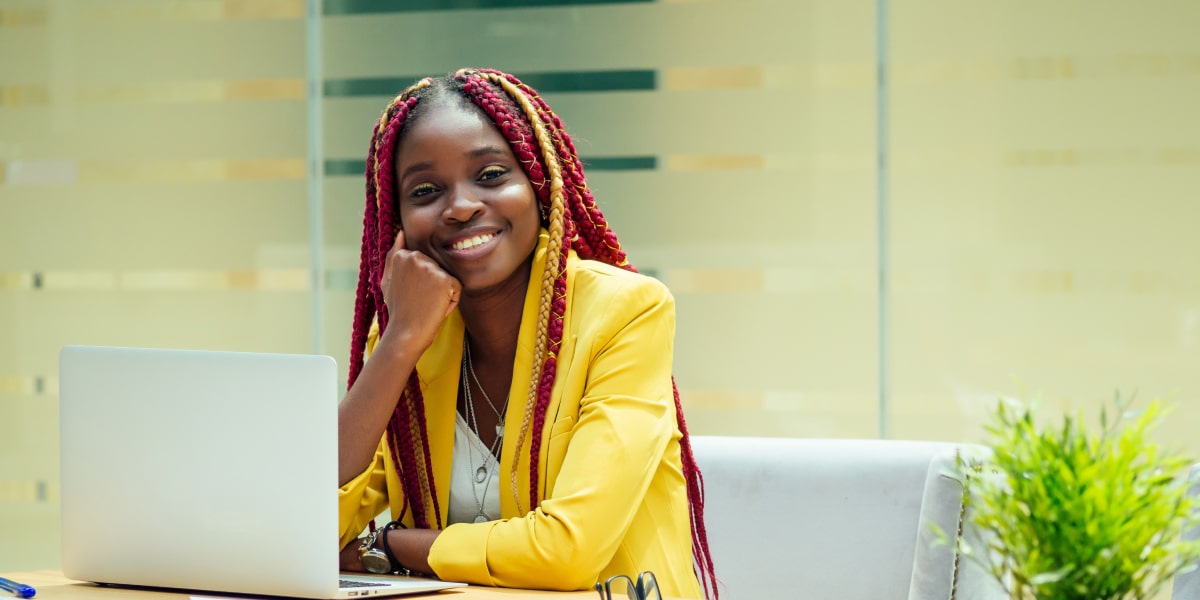 If you’re considering a career in coding, you’ve no doubt got loads of burning questions.

What does a typical day in the life of a web developer look like? How long will it take to master all the necessary skills? And perhaps the biggest question of them all “What kind of web developer salary can I expect?”

While pay is a topic that affects everyone, it can be tricky to navigate—especially if you’re new to the industry. Before you go for your first interview or consider a job offer, it’s important to have an idea of your earning potential.

Of course, there is no fixed salary for web developers: pay will vary depending on your skills, location, years of experience and the company you work for. However, you can certainly establish a realistic range by examining industry data—and that’s exactly what we’ve done. So without further ado, let’s see how much you could earn as a web developer.

If you’re looking to skip ahead to one particular area of our web developer salary guide, simply skip ahead using the table of contents:

As with any profession, web developer salaries vary depending on where in the world you’re based. To give you a rough idea of the kind of money you could be earning, we’ve put together a global snapshot. These figures are based on the latest data provided by Indeed, Glassdoor, and CWJobs for the job title “web developer” (updated in 2022). 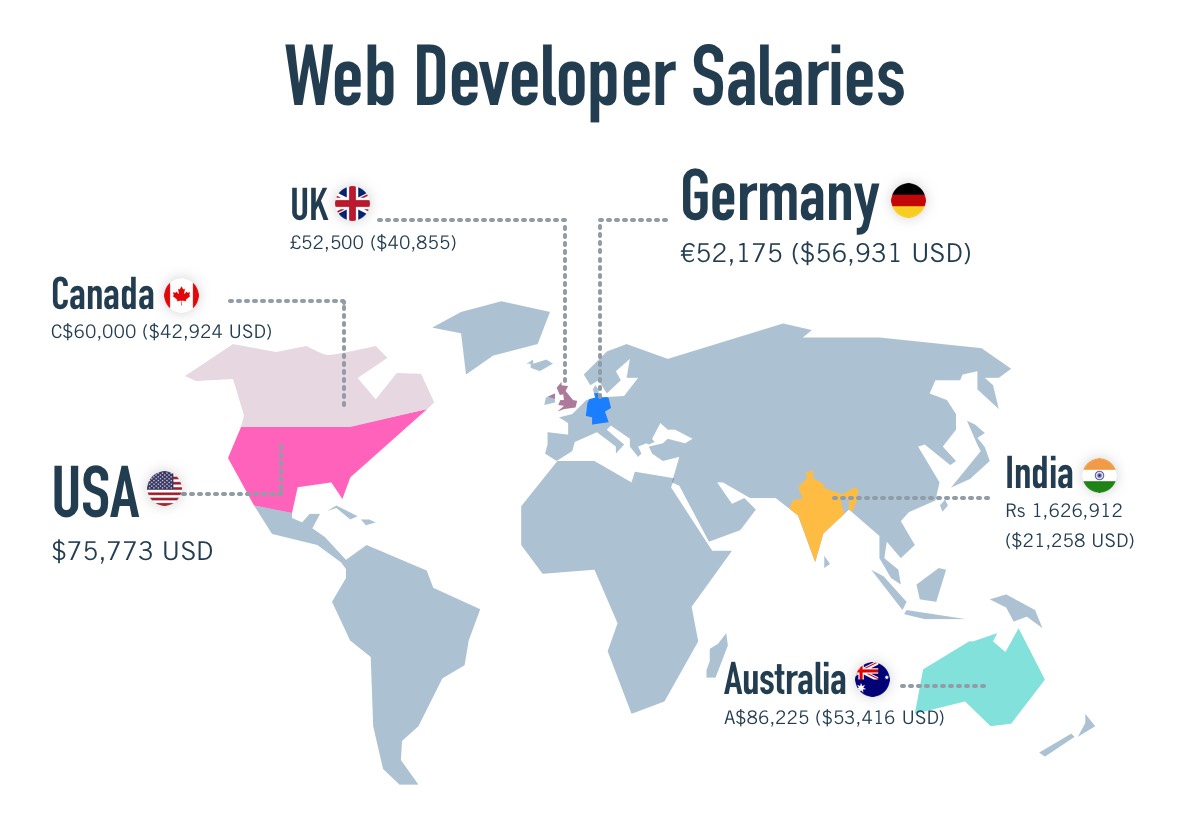 Web developer salaries around the world (2021). For 2022 salary data, see the previous list.

While an international overview can be useful if you’re weighing up either where to take your coding skills, or are considering whether it’s worth your while switching to a career in web development in, drilling down further really helps. Just as there are obvious differences in costs of living between countries, these can be just as acute from city to city.

It’s worth bearing these things in mind when comparing web developer salaries. We’ll start with major cities in North America, and then move east across the Atlantic to see how things are in Europe. 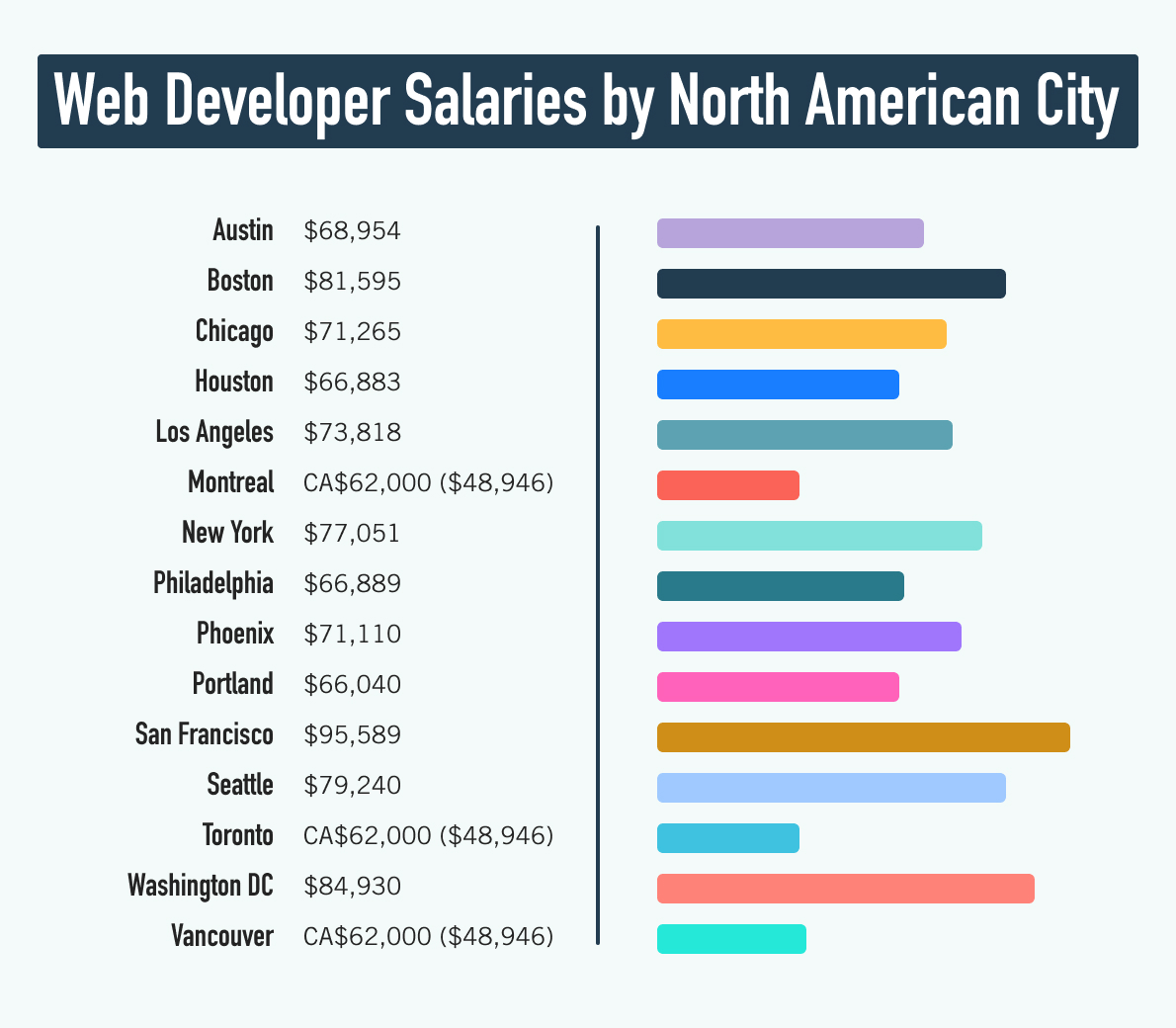 The richness of a city’s tech scene and the associated demand for web developers or competition for roles can really affect how much salary you could earn. On top of that, availability of housing and cost of living can really affect your real life quality working as a programmer there—there’s not much point earning six figures if a huge amount of that is spent on rent and bills. 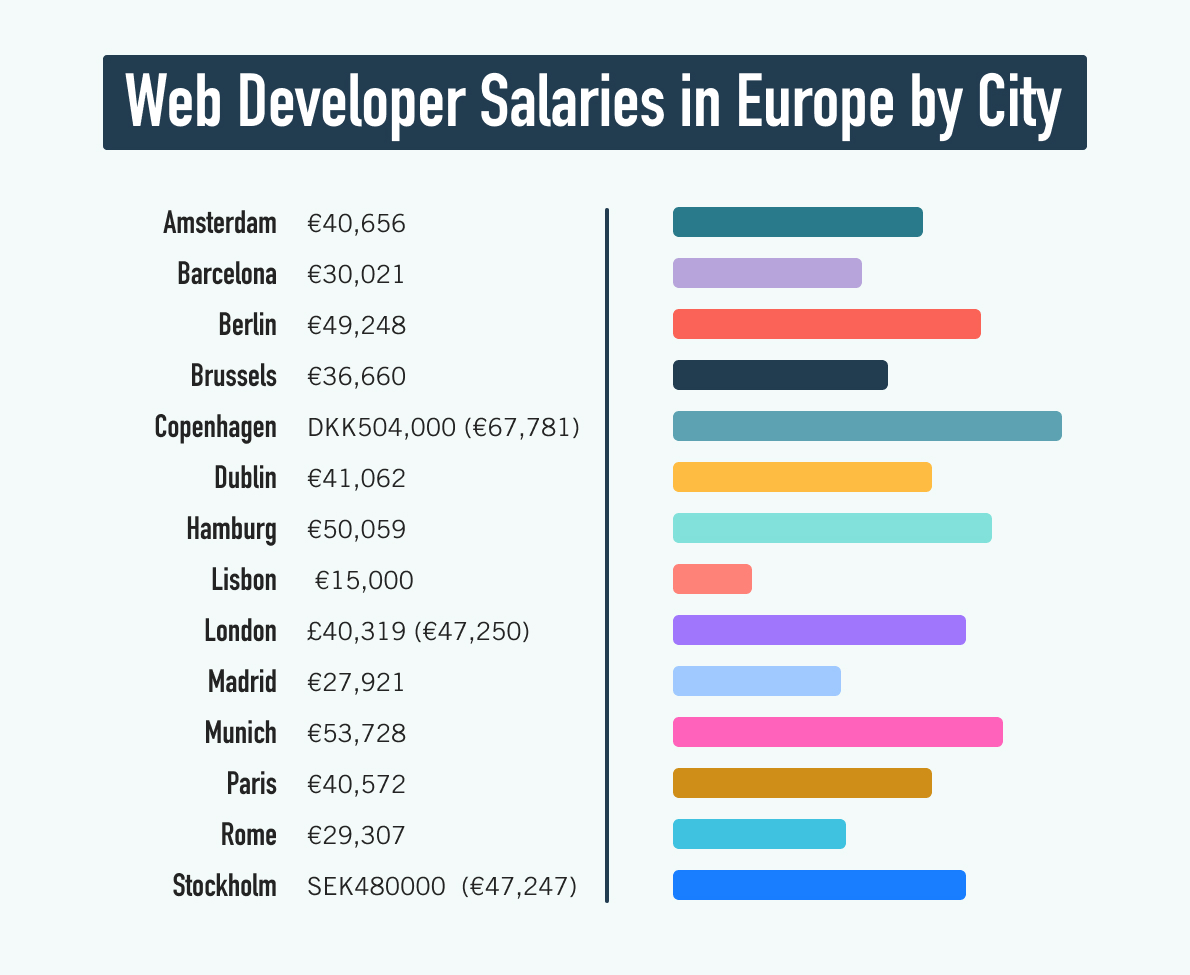 As you can see, some variations can be huge, particularly when comparing cities in different countries. These numbers cannot be everything—as well as being averages, they also do not take into account the variety of bonuses, stock options, and other types of remuneration which do not appear in the base pay. The amount of taxes you would have to pay also varies massively depending on which country you’re going to be working in, as well as other costs such as healthcare.

Of course, location is not the only factor to consider when thinking about salary. Next, we’ll take a look at how salary varies across different job titles.

2. A closer look at job titles 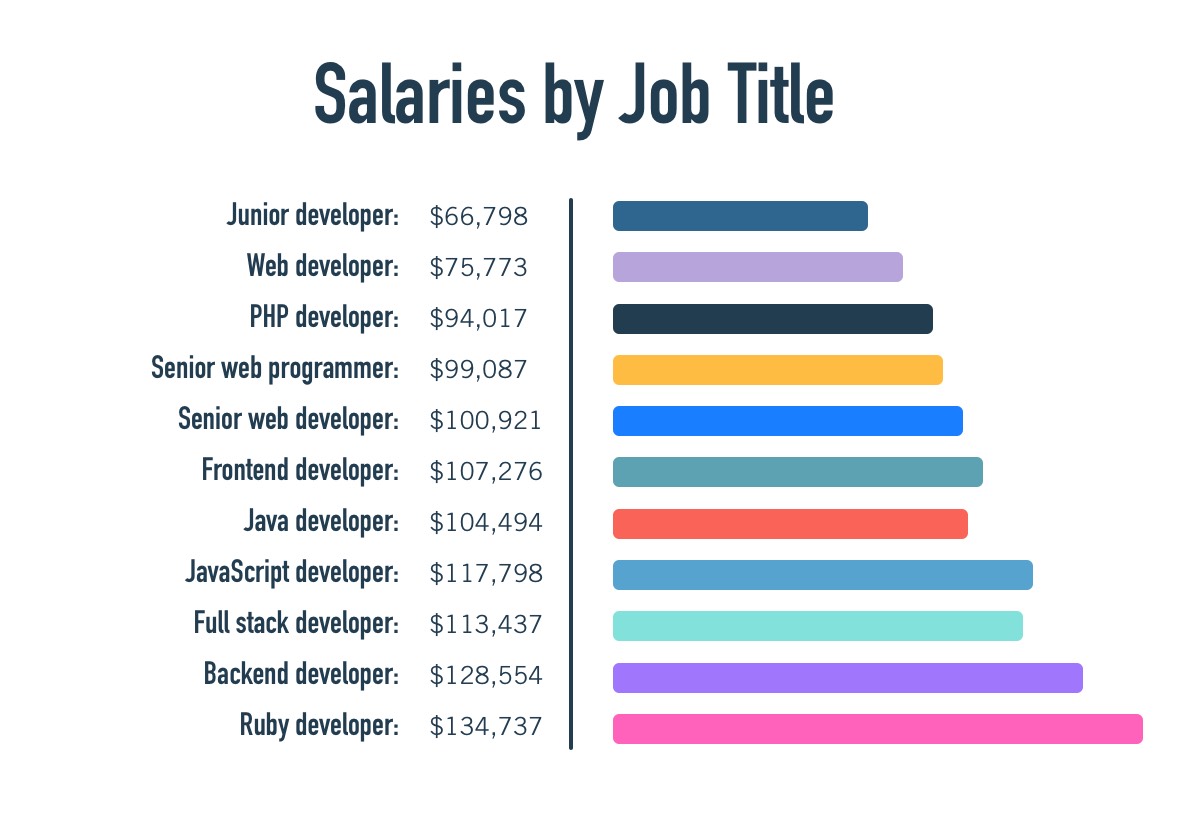 There are many different job titles that fall under the web developer umbrella, and your level of seniority also plays a role. Here are some of the most common titles and their corresponding average web developer salaries in the USA:

Of course, many job ads aren’t simply based on the type of position. Many companies have a tech stack or project built on one specific coding language, and so are looking for a new hire who is experienced in the language, its frameworks, and its libraries. Alternatively, a company could be looking to take its tech infrastructure in a different direction, and the CTO has decided which language they need to hire specific developers in to build it.

This is where becoming an expert in a particular coding language can really pay off. Below we’ve researched the average web developer salary for the US. If you’re not so familiar with some of them, you’ll find more information in our guide to the most popular programming languages. 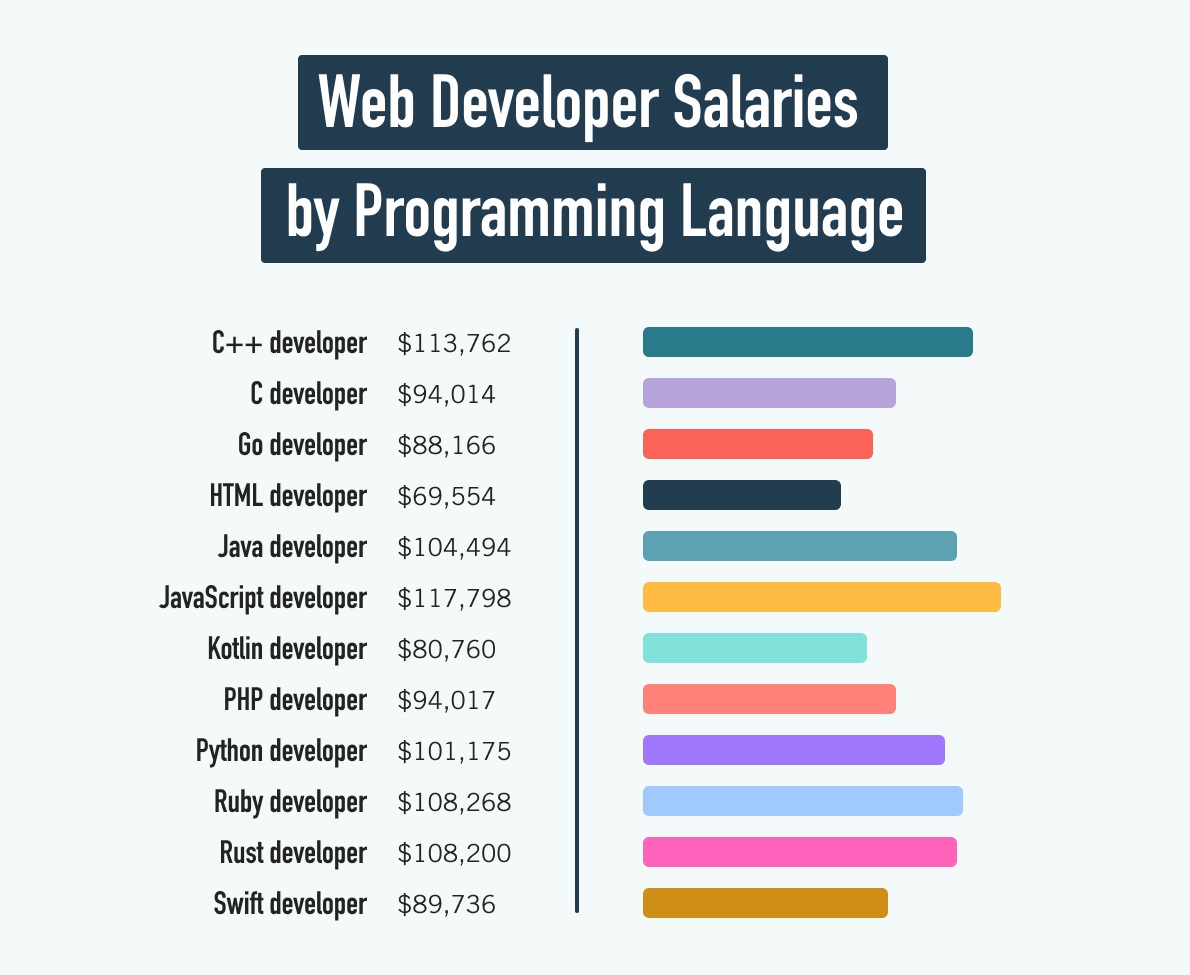 4. How can I boost my web developer salary?

As you can see, a career in web development could take you in many different directions. Whichever route you take, there’s plenty you can do to boost your earning potential. If you’re just starting out in web development, you will most likely begin as a junior. However, you might already be thinking about what you can do to advance your career and climb up the salary ladder.

As with any profession, you can boost your earning potential by constantly adding to your skillset. This might be learning a new programming language in your spare time, or exploring different frameworks. As your knowledge base grows, you’ll be able to branch out in the workplace and really sell yourself as a valuable all-rounder. Never pass up an opportunity to learn something new!

Although web development is a truly modern field in that you don’t need a certain qualification to become one, some accreditation can help boost your earnings. While the options out there are numerous, our guide to the best certification programs should make choosing one simpler.

At the same time, if you want to increase your web developer salary, you also need to build credibility within the industry. Contribute to open-source projects, take part in hackathons, network at local meetups and, if you have time, maybe consider doing some freelance work. Again, the more skills and experience you gather, the easier it will be to push up your earning potential.

Last but not least, it’s absolutely crucial to move with the industry. Keep up with the latest web development trends, be aware of current technologies and stay on top of industry news. In such a fast-paced field, you need to keep your skills up-to-date in order to maintain and increase your value as a web developer. 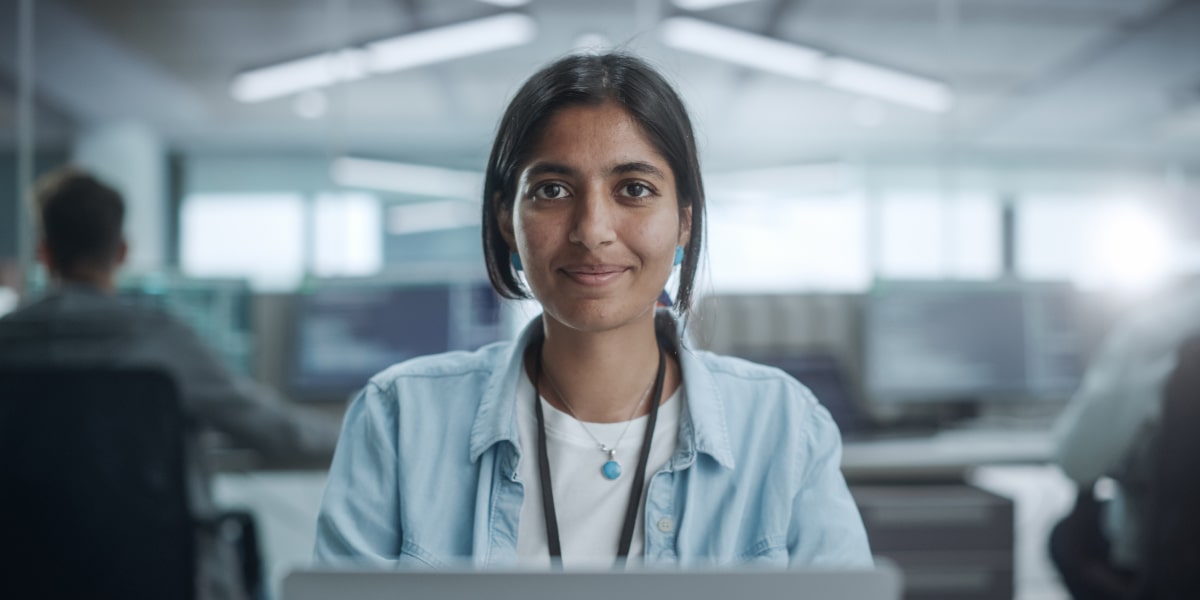 A career in web development is not only financially rewarding; it also has a lot to offer in terms of job security. The Bureau of Labor Statistics predicts 15% employment growth for web developers between 2016 and 2026—much faster than average. On top of that, in the wider job market a web developer salary is very competitive—it ranked as the 8th best job title in tech based on salary and employment rates.

If you’re finding this has grabbed your interest and you want to see what taking the first steps might look like, in this video tutorial our in-house developer Abhichek helps you build your first website:

Sounds like the kind of job you want? Discover how to become a web developer or jump straight to our web development program. So in short, if you’re asking “How much will I earn as a web developer?” then the answer is essentially “As much of what you make of it.” The sky’s the limit.

If you’re of course interested in learning more about the world of web development in general, there is an almost endless sea of resources out there. These articles are just the beginning: