From Print Publishing to Digital Design: How I Retrained To Stay Relevant in a Changing Industry

Gaelle had worked in print publishing all her life. But, as the industry waned and the nature of her job changed, she sought something more relevant and creative. At age 40, she decided to retrain as a UX/UI designer. Now, she’s landed her first job in the field. We caught up with her to hear all about her career change.

After decades in a completely different industry, Gaelle wasn’t sure that she’d be able to successfully retrain as a UX/UI designer. But, with the support of her mentor, tutor, and the wider CareerFoundry community, she was able to update her skills and land her first job as a UX/UI designer at an agency in London. Here, she gives her honest review of the CareerFoundry UI Design Program, and shares what it was like to network as an introvert. Aspiring UX and UI designers, take note!

Hi Gaelle! Can you tell me about your background and why you decided it was time for a career change?

My background is in print publishing and I’d been doing that my whole life, really—I’m 40 now. But in the past couple of years, the nature of my job changed a lot and the need for print had decreased. My expertise was on the production side and a lot of it was pretty much irrelevant. As the business changed, my job became, to be honest, quite boring, and I wasn’t being challenged anymore. I felt like I was being left behind and I needed to move to something more digital and more creative.

How did you discover UX/UI and CareerFoundry?

I had always been interested in graphic design but I wasn’t sure it would be enough for me. I wanted something more in-depth and with more analysis involved. I started researching and thinking about what I should do next. I had no idea about UX or UI but when I discovered them, I felt like they fitted with my inquisitive nature! It was exactly what I wanted.

I found CareerFoundry quickly when I began researching. The flexibility of the courses appealed to me, and the fact that it was all online and I could keep my job. I was still working full-time so I needed something flexible to make it work.

How was your experience during the CareerFoundry UI Design Program?

It’s a big commitment and, at first, I underestimated how much time you need to have. It was a lot of work and there is a lot to learn. What’s great of course is the flexibility. Each week you can plan how much you want to achieve and really customize your studies around your other commitments.

Once I got into the rhythm, I was amazed at how much time I wanted to spend on the tasks, because of the way the program was structured and the encouragement from my mentor and tutor. It made me constantly want to do my best, you know, I wasn’t just doing the bare minimum—I wanted to push myself and I made more time for myself. I hadn’t anticipated that! I really enjoyed it, and I actually wanted to work hard.

When you announced your news in the CareerFoundry Slack channel, you cited the overall support from mentors, tutors, and the CareerFoundry community as the reason for your success. So how did you maximize the effectiveness of these resources?

My tutor, Khalil, was really great. He was always reachable, so if I was stuck with something, I could just message him on Slack and know that in a few hours he would always come back to me. And there were times when I was really stuck where he even jumped on a quick call. So of course, I don’t know if that would work with every tutor, and that’s all down to their availability. But it felt like I was really supported by him. And very often, Khalil encouraged me to just submit the task, even if I wasn’t 100% sure about it, so we could go over my draft instead of me being completely stuck. I learned to just put my work out there on the platform. Or to put it on the Slack community channels, and someone will come back to you and say, try this or try that. There’s always someone who’s going to be able to help you out. It’s a great support network—you never feel like you’re on your own.

That makes sense, especially in online education where it’s easy to feel isolated at times—and especially during the pandemic.

Yeah, then you kind of spiral out of control thinking, Oh, my God, I’m not good enough, and I can’t do this. So it’s always nice to take a step back and go and see other people’s reactions. And you’ll find that actually, loads of people probably have the same problem as you. So it’s really encouraging to talk to other people!

That’s great advice. What was the feedback and communication with your mentor like?

Definitely! Now let’s talk about CareerFoundry’s Job Preparation Course, which you said also helped you to be successful. Why would you recommend that students enroll in Job Prep when they have the opportunity?

I would say it’s a must. It gave me the confidence I needed as someone who was changing careers and obviously very unsure about what I’m doing next.

You don’t just get a piece of paper that says, Hey, I know how to use Figma and Sketch and I’m brilliant at designing icons! You learn to tell your backstory and articulate how you can analyze problems and solutions. And very often I feel that’s what recruiters and hiring managers are really interested in. It’s not so much that you’re skilled and you can design something really beautiful. I think it’s more in depth than that. They want to know about you as a person, and I think the Job Preparation Course really helped me realize that. I was terrified about job interviews and sending out my first applications, but the course gave me the right tools. I thought it was brilliant.

So after you completed job preparation, did you do any networking?

Oh, that really terrified me! I’m a bit of an introvert, so I hate the idea of putting myself out there. Plus it was tricky with the pandemic. I joined a few online webinars where there were breakout rooms to talk to a few people. It went well for me but I didn’t find my job that way. I actually found my current job through my network of friends. And I admit I was a little bit skeptical when people said, Oh, you know, talk to your friends and family first. That’s how your networking starts. But for me, it turned out to be true!

I found my job, indirectly, through a very close friend of mine who I’ve known for years. I mentioned this creative agency I saw in passing to him when I said I was moving into UX. And he said, Oh, in my work, we actually work with this agency. They do all our work for us. They’re brilliant. And I just started following them on Instagram and learning more about what they do—mainly out of curiosity rather than actually looking to work for them. But then a few months later I found out they were looking for a UX/UI designer and they hadn’t advertised it anywhere else. It wasn’t on LinkedIn, it wasn’t on Indeed. I think they wanted to target a very small pool of designers to come forward. So I just saw it on Instagram, because I was following them through my friend’s recommendation. And that’s how it worked out!

That’s amazing. Congratulations! I know you’ve not started working there just yet, but can you tell me more about the company and what your role will be like?

Yes that’s right, I haven’t started yet, but it’s all set up and I am starting in ten days’ time! I’ll be joining a digital agency in London called Pixel Fridge as a UX/UI designer. It’s very exciting, because they’re a small agency and have some really nice clients, but they are expanding and getting more and more work, which is why they were hiring for my role. They already have a UX and a UI designer, and they were looking for someone hybrid, which suits me.

They wanted to hire someone more junior who has not yet found their niche and can be moulded to meet their requirements, bridge the gap between the two existing designers, and someone who is enthusiastic and open to learning anything new. I am all of those things, so it’s worked out well! I hope I can deliver!

Thanks Gaelle! Congratulations again on the new job—keep us updated about how it goes!

Feeling inspired by Gaelle’s story? You too can build a career you’ll love, whether you’re starting from scratch or bringing experience from another field. Learn more about the UI Design Program here, or speak to one of our program advisors. They’ll help you figure out your next steps.

Want to try your hand at UI design first? Sign up for a free, introductory short course. 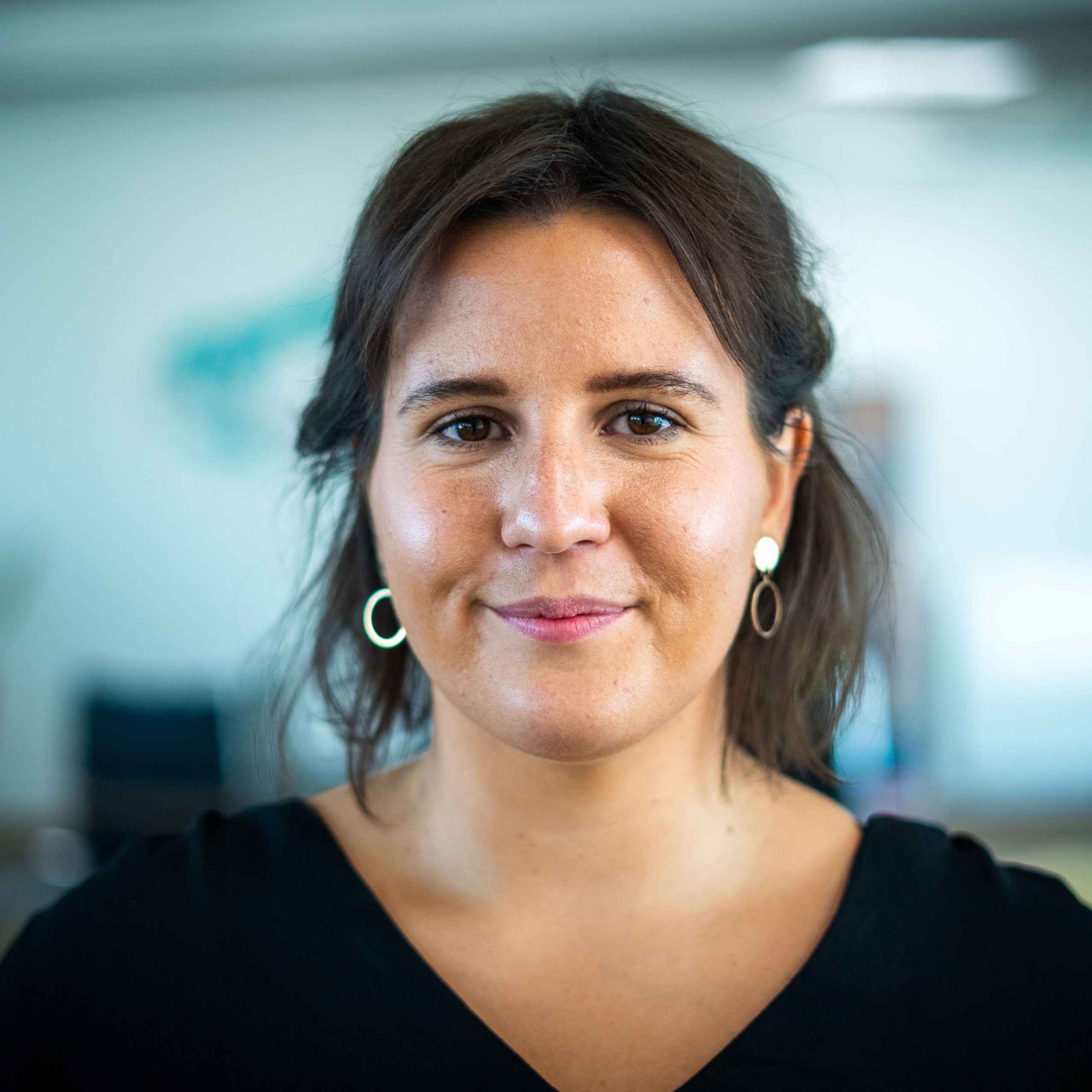 Originally from northern England, Alison’s marketing background ranges from gaming, to sports, to the arts. When she’s not writing about CareerFoundry’s inspiring alumni, she can be found doing yoga, reading a weird book, or exploring new restaurants and cafes around Berlin.

Upgrade your skills with a specialization course

“I’m here to help you become a UI designer”