How I Went From Software Engineer To UX Designer

After discovering the field of UX design, Ladislav realised it could fulfil his need for human interaction and alleviate the frustrations of software development. Here he talks about his transition from developer to designer. 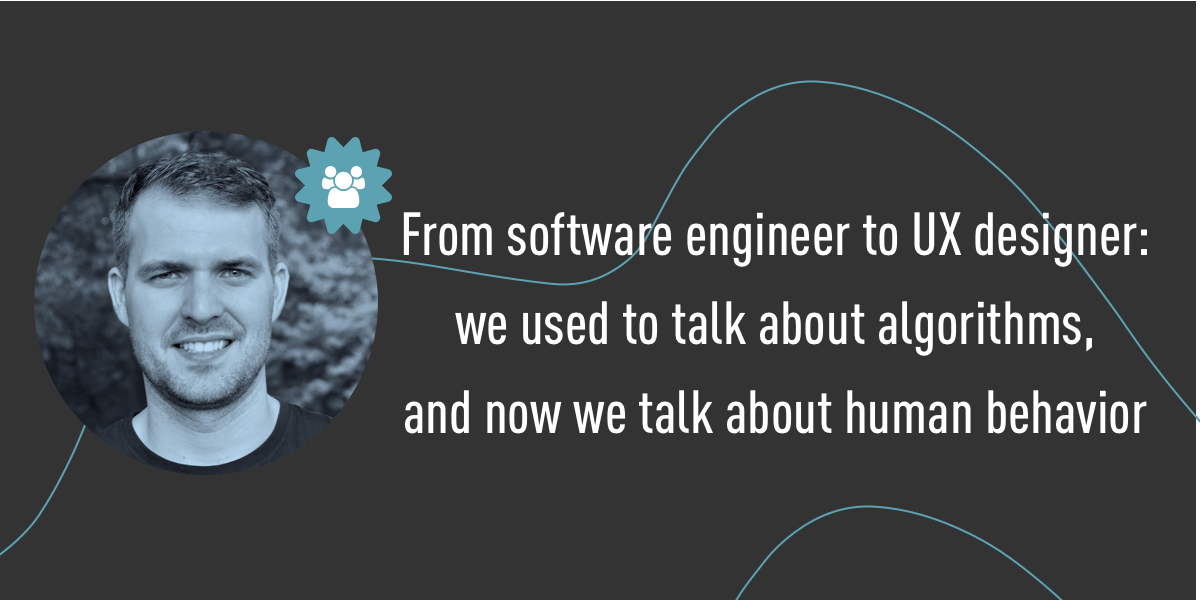 Ladislav has been at his new company, Credit Suisse, for just over a month when we talk. Asked how it’s going, it becomes quickly apparent that he’s been thrown in at the deep end, and that he’s relishing the challenge. He recounts the story of his first few weeks with fervor and enthusiasm.

“I had just started when the team had to deliver a huge bunch of screens and flows. I didn’t get the chance to discover the environment. I arrived and my boss told me the next deadline was in three weeks. It was good – it wasn’t boring – no introduction days. He said just focus on the work.”

This might not be everyone’s idea of a dream start to a new job. For Ladislav though, his new daily tasks as a UX designer supply him with energy, rather than sapping it. He cheerfully reports that he now arrives home in a good mood after a day of design and discussion, of creative expression and purposeful human interaction. This wasn’t always the way, however.

Ladislav grew up in a small village in Slovakia. As secondary school came to an end and attention turned to higher education, he made a bet with his friends that he could get into one of the top universities in Slovakia to study Applied Informatics. He duly applied and was accepted, and embarked on studies into such mind-boggling fields as cryptology and backend web technologies.

After graduating, he quickly landed a job as a software engineer in Vienna, Austria. Software engineers are well-paid, and are often considered to be in possession of one of the most desirable jobs on the market – that doesn’t mean it’s for everyone! Indeed, his motivation to change career was borne from frustration with the process of software production, as well as his need for greater human interaction.

“We would deliver the software – often from big projects – but the projects didn’t go smoothly, with lots of tickets because the users couldn’t figure out how to use the new systems. So I asked myself why, and discovered there is a profession to make it all user-friendly. This started to excite me. I was never the kind of person who could sit and code all day long anyway, and when I found out that there is this branch of design making the product experience better, I realised it was something for me.”

Ladislav’s curiosity had been awoken, but he was still unsure of what a job in UX actually entailed, and, importantly, how to enter it. Naturally, he turned to the global brain that is Google and asked a simple question – what is UX design? – and that’s how he stumbled across CareerFoundry. Unbeknown to him, this was to be the catalyst for one of the biggest changes in his life so far.

“That’s how I came across CareerFoundry – by asking Google that exact question. What’s the difference between UI, UX, interaction design… and I came across an article explaining all the differences. And then I got hooked on CareerFoundry. I read that the course wasn’t just a few weeks – they go in deep and it takes time, and I wanted the details. And the course is mentored, and I know I always need feedback to improve.”

The fact that CareerFoundry is highly flexible – courses can be done entirely online and as a full-time or part-time student – appealed to Ladislav. He had reached a point in life where he had enough money to be able to pose himself the question of what he really want to do, but still needed to be able to continue working and earning as a software engineer while completing the course. Looking back on his time with CareerFoundry, he waxes lyrical about his mentor.

“I learned so much. It was eye-opening, because I got a picture of what the day-to-day life of a UX designer looks like. That was exciting. I had so many questions.”

Once he was three-quarters of the way through his course, Ladislav and the Career Services Team started to prepare his profile and applications for the burgeoning UX job market. He was typically methodical about this, creating a spreadsheet where he kept track of the status of his correspondence with his companies of choice. In the end, however, it wasn’t his calculated approach that landed him his first job – it was happy coincidence. His mentor posted his portfolio on LinkedIn, asking whether anyone was looking for a top-class UX designer in Switzerland. This post was seen by a manager at Credit Suisse who had worked with Ladislav previously in his role as a software engineer, and it just so happened that a UX designer with a background in coding was exactly what he was looking for.

“He got in touch immediately and said, ‘Hi Ladislav, how are you? I think we should meet for a coffee.’”

So how’s it feel now he’s made the change?

“There were days as a software engineer when I was sitting coding quietly, not talking to anyone all day, and that was not good for me. I cannot just sit and not have any human connection. And now I’m dealing with people, and I really enjoy it – and they’re really happy because I’m asking them about their problems – and solving them. It also feels so good to be in-house, more relaxed, not worried about time, and more worried about the work I’m doing. It’s different. I’m super happy.”

Ladislav recognises that changing jobs has also had a knock-on effect on his personal life, and as we come to the end of our conversation, this is what really sticks.

“I’m more relaxed and not so stressed and anxious, and I talk to people more, and I don’t feel “strange” when I meet people. I finally have human interaction and realise this is what I was missing for so long. I have a tendency to watch what people are doing and how they are struggling and even during team lunches we discuss this kind of thing. I like it more to talk about this – previously we talked about algorithms, but talking about how people behave is much more fun.”

And what does he recommend for would-be UX designers pondering making the step from their current job to a new career.

“You don’t want to spend so many hours doing something which isn’t interesting for you. And it’s not just those hours, but also your private hours. If you do something boring, sitting in boring meetings, then you go home feeling tired. It affects your life. If there’s a chance you can improve it, then why not? Step out of your comfort zone and see if you can find something more interesting.”

If you’d like a step-by-step intro to find out if a career in design, development, data, or digital marketing is right for you - sign up here for a free short course in the field of your choice.

If you’d like to speak to an expert program advisor for free about how you can get a new job in tech - connect with us here.